Posted on September 7, 2011 by arlingwoman

Joe Kelly, of Master Gardeners and the Virginia Cooperative Extension talked at the Central Library garden last Wednesday night to a group of people who were, by and large, already composting.  He brought models for composting containers you can build, guidelines for what to put on the pile, and solutions to a number of common problems.

A number of people had questions about compost containers, some of which can be expensive.  As someone who grew up in a rural area, I have always found the “container” issue a little puzzling.  The people I knew who had compost piles didn’t worry about hiding them.  For urban people, though, a container may keep the neighbors from wondering if you have a garbage pile, keep down that fermented mulch odor, and if it’s a barrel, help you turn it.  In fact, many of the problems mentioned were about how to get the stuff turned regularly when it’s in a deep container.  Joe recommended having something like a fence that could be opened, then closed again when the turning was done.

Some of the models for composting containers; a garbage can with holes punched in it works, too.

There are things that should not be put on compost piles, and they are often the culprits if the pile smells.  These include animal by products—meat, bones, fat, moldy cheese or any feces from carnivores, such as cats or dogs.  Diseased plants, pressure treated wood or wood chips (these have chemical you wouldn’t want in your food), and anything that should be going into your recycling bin are not good.  They either spread disease or won’t break down.

Things that should be put on compost piles include fresh lawn clippings, coffee grounds or tea bags, crushed egg shells, vegetable scraps with no oils on them, garden trimmings, leaves, dried agricultural manures, shredded newspaper or ash from your fireplace or wood stove.  Pieces thrown into the pile should be relatively small to help with breakdown. 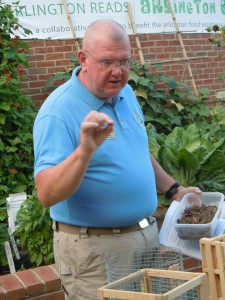 Woody twigs should be three inches or less long.

The pile should be moistened periodically if there is no rain and stirred often enough to keep it aerated.  Generally, the more attention you pay to it, the faster it will break down.

You can get more information at http://compostinfo.com.  Arlington County also has a “How to Compost” video and USDA has some advice for small scale composters as well.  And remember: it’s not rocket science.  There’s a reason it’s called a “heap.”