River in the City

When I need a dose of the river and don’t want to drive anywhere, I walk down to Theodore Roosevelt Island over the bridge that spans the George Washington Memorial Parkway near Rosslyn.

It never fails to refocus my mind.

In the spring, it has bluebells, dogtooth violets, spring beauties, may apples, Solomon’s seal and mushrooms both edible and poisonous.  In the summer it is lush with woodland greenery, including poison ivy and beautiful water grasses. Along the shore near the marshy end of the island, there are water lilies, arrow arums, duck potato and water hyacinth. 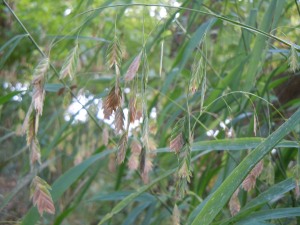 It isn’t just a botanist’s dream, though.  There is ample evidence of deer and raccoons and birds that are a treat to glimpse.

On a recent day as I kayaked the perimeter of the island, I heard the loud, hollow kuk-kuk-kuk sound of a big woodpecker.  I stopped paddling and looked up.  At the very top branch of a dead tree, I spotted the bright red crest of a pileated  woodpecker.  I had seen these birds before, but only as they crept on tree trunks looking for insects.  Seeing one flit among tree branches then take flight, showing its beautiful white wing linings contrasting with its black primaries was riveting.

As I continued along the shore of the island, I saw a young spike buck lying in the grasses near the water’s edge as though enjoying the scenery.  He didn’t move as I drifted by, though our eyes met.  Further on, past the pedestrian bridge that crosses from the parking lot to the island, I heard the distinct chirring noise of a kingfisher and saw it make several sorties over the water in search of a minnow.

Keeping an eye out for minnows.

And have I mentioned the turtles?  Large and small, sunning themselves on logs and rocks, they plop into the river before you can get too close.  It’s hard to tell what they might be–though my guess would be cooters or sliders.  Once in a while, I have also seen large snappers swimming under the water.

All this between Key and Roosevelt bridges. 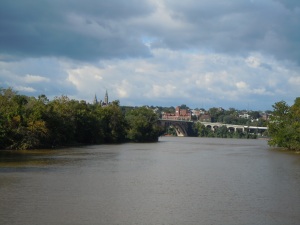 View from the pedestrian bridge to Roosevelt Island.

1 Response to River in the City