Over Columbus Day weekend, my sailing buddy and I, thwarted by lack of wind, decided to kayak in Alexandria’s Dyke Marsh.  We rented kayaks at Belle Haven Marina, one of my favorite places to rent kayaks and sailboats. 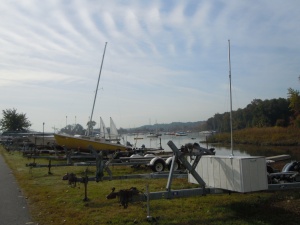 We headed to the boat landing for our kayaks.

I hadn’t been in the marsh for a while, mostly because of September’s unrelenting rain. The marsh, which was diked in the early 1800s to provide cattle pasture, and then dredged in the 1950s, is smaller than it once was.  Still, it contains something on the order of 300 species of birds and an equal number of plant species.

From the Marina, we paddled south, seeing red tailed hawks, osprey, and lots of egrets.

We paused to admire an egret.

The river at Belle Haven provides a good habitat for the osprey as well as bald eagles, which I have seen hunting when I was out sailing.

There is an island in the river that I keep meaning to land on and explore, but haven’t yet.  I always use it as a marker for the entrance to the marsh.

Turn right at the island, then right again into the marsh.

We were extraordinarily lucky in the lack of wind—the river was almost glassy—and the lack of large motor boats and cruisers making wakes.  There was a little mist left over from the night and it intensified colors.

We turned into the marsh and paddled its water trail, seeing wild rice, cattails, duck potato (arrowheads) and arrow arum as well as water lilies.

We could see how high the water had been during the rains.

The redwing blackbirds were out in large flocks feeding in the grasses and cattails.

There were also quite a few egrets and they seemed wilder than they had earlier in the summer, never letting us get within good distance for a photograph.

The egrets were cagey...

There were at least two kingfishers, and we heard them first.  As we went further into the marsh, I rounded a corner and saw one of the birds make a splash on the water and come up with a minnow sized fish.  It flew to a tree with it and I assume had lunch.  I had never seen a kingfisher make a catch before.  As we headed out of the marsh, we saw another kingfisher hunting make a catch.

The trip back gave us a view of the new Wilson Bridge and more turning leaves.  Who needs wind when you can paddle a marsh?