We All Have a River

I have been thinking about Norman Maclean’s memoir of his family and Montana, A River Runs Through It.  In its last and often quoted lines, Maclean describes how a particular act, fly fishing, and a particular place, the Big Blackfoot River, become the confluence of a lifetime of memory and experience.  The sounds of the river—and he doesn’t say, but probably that scent of water on rocks—combine with memory and the four count rhythm of a good cast, so that “all things merge into one, and a river runs through it.” 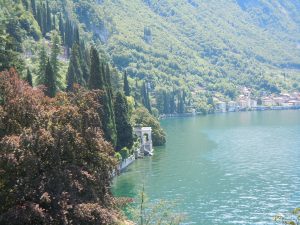 Lake Como from the Villa Cipressi

I think we all have our own river, that place or action that melds the past and present into a sanctuary where skill, memory and joy can focus existence in the moment.  For some people it might be a sports stadium, the act of knitting, a running route, or a kitchen, but for me, it involves actual water.

Dad in his red, wood and canvas canoe.

When my father referred to “the river,” he was usually talking about Little River in northern Alabama.  Like the Big Blackfoot, it is a river that carved a canyon and “runs over rocks from the basement of time.”  My brother and I learned to swim there, not in its famous Blue Hole, but in a shallower secluded place my father knew about, having grown up nearby.  He would turn the car off Alabama Route 35 onto a dirt track and drive until it was inadvisable to go farther.  Then we would wade into the river across a shallow mossy stretch of rock to reach our swimming hole.

My mother is also no stranger to water, having grown up near a number of Wisconsin’s lakes and rivers.  Although she never learned to swim, she was an avid paddler in Dad’s canoe.  My parents would go out on rivers or lakes with my brother and me sitting in the middle like cargo, plump with the bulk of life jackets.  I can still remember the soft gleam of water on the wooden paddles, the sparkle of the occasional droplet on the canoe’s ribs.

I went from being a passenger in a canoe to learning sailing, rowing, and kayaking.  I love the smell of a rock-bottomed river, the way light plays on lakes, the plants and animals that make the water’s edge their home.

When I say “the river” now, it’s almost always the Potomac I’m talking about. Unlike my father or Norman Maclean, my river isn’t a particular place as much as an alertness and a way of seeing, the expectation of wonder.  Several friends have told me that I have good eyes, but it is just that I learned where to look from people who appreciated the natural world.  River, lake, or creek, if I can paddle, sail, hike, or just watch it, I am safe as a child in a life jacket, alert as a bird, ready for adventure, and always in good company. 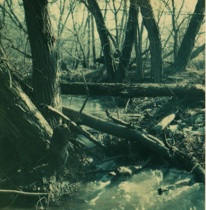 3 Responses to We All Have a River