Late last winter, Plot Against Hunger members had been eyeing what appeared to be a formerly planted area of the lawn of the American Legion Post on Washington Boulevard.  It was up against the wall of Casual Adventure, an outdoor outfitter, and included a planter in front of two parking places.  I visited the Post one afternoon to ask whether Plot could have the area to garden.  We followed up with a letter proposing larger and smaller projects than I had discussed that day and touting our reliability by referring them to Central Library’s garden.  The result was we got permission to go ahead last month.

The bed was pretty well covered with low-growing weeds.

Puwen Lee lined up parishioners from Ascension church on Pershing–who had been regular volunteers at AFAC–to clear and plant the plot.  On Sunday, an energetic group of them did an enormous amount of work in a very short time.  Because it is late to be planting most things, Plot decided to plant squash.  Since many people actually delay planting squash until late June because of a bore worm, this seemed the best thing to do.  Squash are prolific, and the soil preparation for them will pave the way for cole crops in the fall.

Ascension created three to four hills in several groupings down the wall.

The work party cleared the plot of weeds and created hills for the squash.  Then they laid newspaper down as a weed deterrent, covering it with mulch.  We’ll add more mulch later to cover the whole plot area.  The squash seeds were planted and snug in their hills for Monday’s day long rain—an auspicious beginning.

We only had so much mulch, so tended the squash hills first.

It turns out the planter, which we want to use for flowers or some other attractive plants, needs to be rebuilt.  The group weeded it, then covered it with a tarp so the soil won’t wash away. 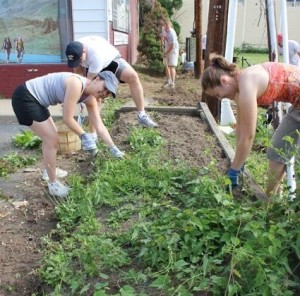 Once it’s rebuilt, we’ll put some flowers in the planter.

We are very excited about this new addition to our Plot Against Hunger gardens as well as the possibility of more fresh vegetables for AFAC.  Like Ascension, many churches or organizations have the will to work a garden, but not the actual land.  We appreciate the generosity of American Legion Post 139—and hope that they like the look of the garden as the plants come up and the flowers bloom.