Posted on September 9, 2012 by arlingwoman

Yesterday was our garden potluck.  It was threatened by the storms and tornadoes we had in the Washington area, but came off nicely for those who attended. 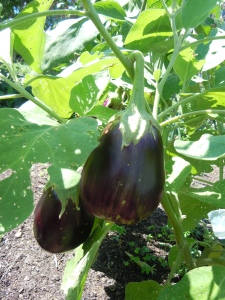 These black beauties are one of three types of eggplants in my garden.

I swung by the garden today to see whether everything survived the wind and rain—and the eggplants looked as though they had expanded by some secret eggplant formula overnight.

There was not much to do in the garden.  I am waiting for the eggplants to ripen, the peppers to be ready for harvest, and the fall crops to come up.

In my oven, at this very moment, are stuffed peppers!

I took the opportunity of a gorgeous, sunny, cool, dry day to take a bike ride along the river.  Crossing Memorial bridge, I saw an osprey hunting.  West Potomac Drive was closed off to car traffic because of the earlier triathlon, so as I headed toward the 14thStreet Bridge and the Jefferson Memorial, I was able to look around and relax, rather than be hyper alert to traffic.  Wow.  What a luxury!

On the 14th Street Bridge, someone had placed flags every six feet on the pedestrian walkway.  At first I thought this was something to do with the triathlon.  The river is wide here, and the bridge, as a consequence, is long.  The flags were impressive.  As I rode, I realized there were tags attached to each flag.  They each had a name and a place—Robert Hamilton, Pentagon, for instance.  Another bicyclist had stopped to take a picture and I almost stopped too, to ask if she’d email me the photo.  I had not brought my camera.  I wanted to enjoy the beautiful day and the sparkling river.  And I did.  I also got the image of those flags in my memory.

Next week, I have some volunteers coming to my community garden to clean up a triangular area outside our fence that has become overgrown with nut sedge.

Crops may be stolen here, but maybe the Plot Against Hunger sign will deter theft.

We are, I hope, going to plant a fall garden for the Plot Against Hunger, and I’ll take pictures to let you know how it goes.  I have lettuce, beet, kale, turnip, carrot, and other seeds, as well as some seedlings from the USDA experimental station in Greenbelt.  There are rumors that this winter is going to be less conducive to the continuous harvest we got last year, but hope springs eternal, doesn’t it?

Not hibiscus, but…okra! I hope to have a few more pods before fall.