Not for the Garden: Sewing Vegetables for Mardi Gras 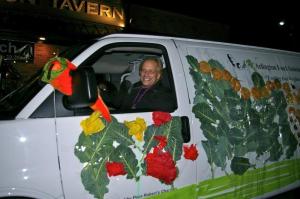 Every year, the Clarendon neighborhood of Arlington has a parade on Mardi Gras, complete with bands, beads, and vehicles decorated by local businesses, clubs and schools.  Sometimes a politician shows up, but mostly the streets are lined by folks from the neighborhood out for some family fun.  Last year, the Arlington Food Assistance Center drove one of its vans in the parade, decorated with real kale, some bagels, tissue paper and a stuffed velvet carrot.  This year Puwen Lee had some other ideas for the van.  An email arrived in my mailbox inquiring whether I would like to “sew giant vegetables for AFAC.” 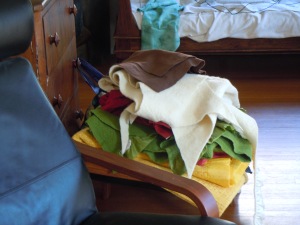 Some of the assorted fabric Puwen acquired.

Well, of course every gardener wants to sew giant vegetables.  But these were to be decorative rather than edible.  Puwen got some volunteers fairly quickly, and offers of vegetable materials as well.  I had no idea some of my fellow Plotters Against Hunger were crafty needle women as well as dedicated gardeners.  In addition to donated material, Puwen went scouting thrift stores, where she found, among other things, the perfect blankets to make a turnip and an ear of corn and the perfect maroon curtains to make a chili pepper.  She started making patterns for the vegetables. 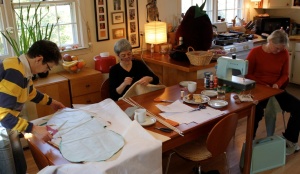 Becky, Michal, and Julie were all working on the giant turnip; note the eggplant upper right. Photo Puwen Lee

When I arrived at Puwen’s house on Saturday, work was well underway.  A beautiful purple eggplant already sat majestically on the kitchen counter while Becky, Michal and Julie started work on the biggest turnip I ever hope to see.  On the kitchen table were several illustrations of the AFAC van and possible arrangements of a Mohawk of vegetables along its top.  I took some orange material to the living room, drew some carrot shapes on it, and cut them out with some impressive fabric scissors that belonged to Michal.  Then I ran them up on Puwen’s sewing machine.

The carrots required a Styrofoam inner core, around which I wrapped strips from egg crate foam bedding.  Then I pulled the sewn fabric over the forms.  Meanwhile work was proceeding apace on the turnip, which was turning into a truly monstrous vegetable with a large root extending from its main body.  Because we were using materials to hand, the vegetables were stuffed with all sorts of things, including plastic bags and newspapers as well as foam, bubble wrap and Styrofoam forms.

Everybody’s happy when their garden is growing vegetables like this! Photo Puwen Lee

Michal and Julie left to continue their Saturday duties elsewhere and Becky, Puwen, and I continued work on carrot tops, a chili pepper, and the turnip.  Toward the end of the day, we carried the Turnip out to the piano bench to see what it would look like with its root and green tops attached.  There were still more vegetables to make.

Puwen attaches the root to the turnip

I went back this afternoon to find the chili pepper and a tomato had been finished and an ear of corn was under fabrication.  Julie and Becky had been back to help and Julie had taken the turnip away for finishing.  I finished the final carrot top and helped with the ear of corn.  What a harvest!  I can’t wait to see all the veggies on the van.  Check it out if you can, Tuesday night at 8:00 pm, on Wilson Boulevard between Courthouse and Clarendon.  Come after the pancake supper.

Now this would be quite a harvest.