This week I noticed the crop of winter cress is particularly vigorous in Arlington.  Many people may think this is a weed, but it’s a lovely green for salads, with a nutty, peppery or spicy taste.  As recently as 80 to 100 years ago, this was the first green of spring for folks without access to greenhouses and vegetables shipped across the country or around the world.  They tended to eat it cooked with something like cornbread to soak up the broth.  But be warned, as with any green, it takes a lot to make a whole meal; hence the recommendation to use it in salad.

This is what the winter cress looks like up close.

Even in this time of plenty and easy access to food, February is often a time of cravings for me.  I’m not talking about cravings for chocolate brownies or marble cheesecake; I get cravings for things like spinach or thick-walled red peppers, and once, scallops.  Most recently I found myself thinking a little too often about pickled beets.  Twice I had looked for them in the store and ended by settling for canned beets added to a salad.  Needless to say, this didn’t work.

Last Saturday I looked again, going so far as to ask the man stocking shelves if they had them.  He said he didn’t think so.  I was standing there wondering if I could substitute another kind of pickle when I spotted the jar.  Rick’s Picks Phat Beets.  Not only was this the only kind of pickled beets, but it was the only jar left.  At $7.99 it was, shall we say, a bit pricey.  I considered this for a moment before adding it to my basket.  Having checked out the Rick’s web site, I know that my grocery must have bought these in quantity and received a discount.

Note this jar is not full any more…

When I got home, I opened the jar and ate one of the beet wedges.  It was tangy, spicy, and complex.  I thought I could taste cloves and there was certainly something that gave the pickles a bit of warmth.  It turned out to be ginger.  I polished off the first third of the bottle, turning my index finger pink (it’s true I didn’t bother with a fork), and as ever when consuming vegetables, my mind turned to the garden.

Late last summer, I began to investigate books on canning and preserving.  The books and recipes I had seen before dealt with quantities that were too large.  For instance, I have my maternal grandmother’s recipe for green tomato mincemeat, which everyone remembers as mightily delicious.  The proportions are in pecks and pounds, as they are in many canning books.  Living in a small space without a cellar, I simply don’t know where I’d put the jars that would result from pecks and pounds.  After some research, I finally found a book called Food in Jars by Marisa McClellan (Running Press, 2011) that contains recipes for small batches.  There are recipes for pickled carrots, okra, asparagus, zucchini, and yes, beets. 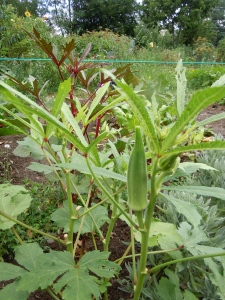 Pickled, okra has none of the texture issues people usually notice, just its own fresh taste.

This year I’ve taken into account the possibility of canning while planning the garden.  I already have 15 packets of seeds, some of which—corn mache, carrots, and arugula—will be going into the ground shortly.  With some work and the luck of a good season, next year at this time, if I have a craving for something pickled, I’ll have it in my pantry.  In the meantime, I’m taking advantage of the winter cress, which combines nicely with the pickled beets! 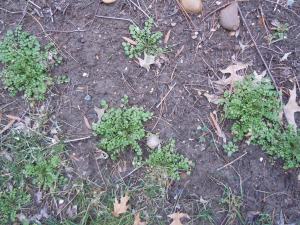 This is winter cress in an area that didn’t get mulched, masquerading as a weed.