Posted on November 9, 2014 by arlingwoman

We are having an extended and beautiful autumn.  The world just seems to be glowing. Even at dusk the trees–turned all manner of colors–seem to be throwing off light. Everywhere I turn there’s some beautiful tree or burning bush.  I’m soaking it all in while I can. 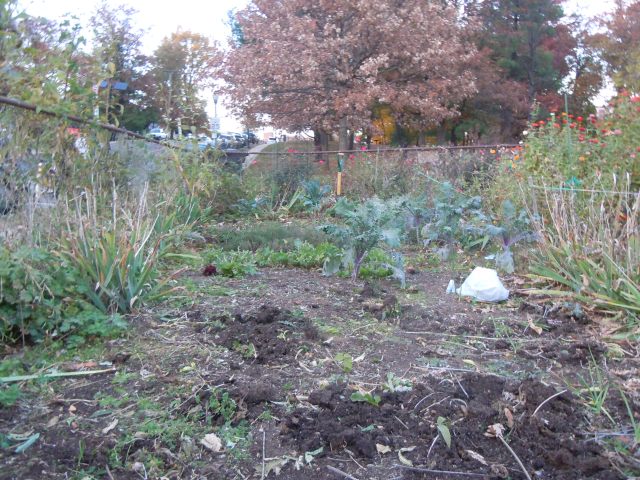 The garden after some extensive clearing out.

Meanwhile, I’d begun to feel a little guilty about ignoring my garden, so today I spent three hours cleaning it up.  It still needs work–more weeding and digging and some manure and mulch at the least. 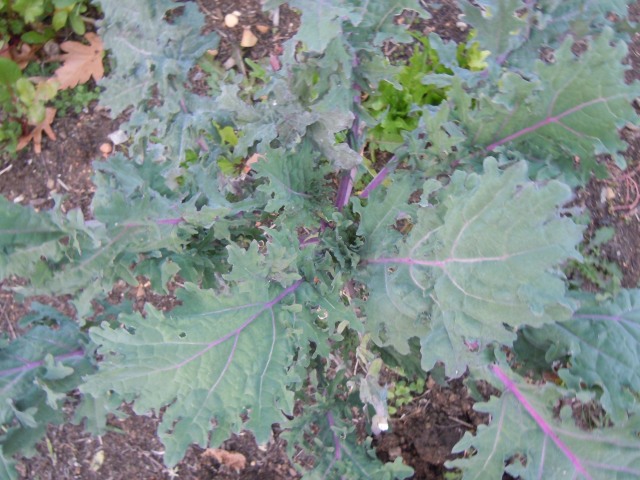 There are still two kinds of kale–this being the blue.

I took out the eggplants, the peppers, tomatoes, most of the chard, and some of the kale.  A couple weeks ago I took out the beans, so there isn’t much left but perennial flowers and the herbs.  I spent  a great deal of time trying to dig out the mint and I reduced the real-estate the oregano is occupying.

Thyme, peppers, sage. Yum. This is the unsightly bag in the picture of the whole garden…

I did harvest quite a few peppers before I pulled the plants.  It almost looked as though some had been nipped by frost, which would be a little unusual, but we have had a cold snap.  The thyme is thriving and I harvested some of that as well as some sage for winter soups.  Right now, there’s a well-thymed chicken in my oven with some carrots and potatoes.  At some point soon, I’ll have to decide whether to pull everything out or bring in the cold frame and take the risk of trying to keep some greens.  It may be cold this year, or it may not, so it would be good to have fresh greens in the winter.  We’ll see!

This entry was posted in Community, Local Food and tagged fall garden, fall garden prep, putting the garden to bed. Bookmark the permalink.