Sowing and Sewing: A Winter Harvest

It was a beautiful winter day today. In between errands, I went to the Plot Against Hunger garden at 10th and Barton to check on the turnips I had left snugged under leaves in November.

I admit this doesn’t look like much, kind of freeze fried…

We’ve had some cold weather, including some sleety slick snow, so the turnip tops didn’t look that great, but when I separated the leaves and looked under them, I could see some nice looking little turnips.

But here’s what was hiding under those frozen leaves.

They had quite a set of roots on them, so I trimmed those, along with the frosted tops and set them aside for delivery to AFAC.

I left the better looking greens on in case anyone might want to use some of them.

While it’s nice to reap the results of the fall sowing, it’s also been nice to rest. I’ve begun to compile seed catalogs and think about possible garden plans for this spring. I’m also enjoying some other sewing, with almost immediate harvests and a lot less weeding. I made this happy little tooth, obviously NOT uneasy under his crown.

My colleagues and I are going to give this to our boss for sinking her teeth into some tough issues last year.

Then I sewed this treeling, also happy, probably because it’s so warm on the bookshelf. 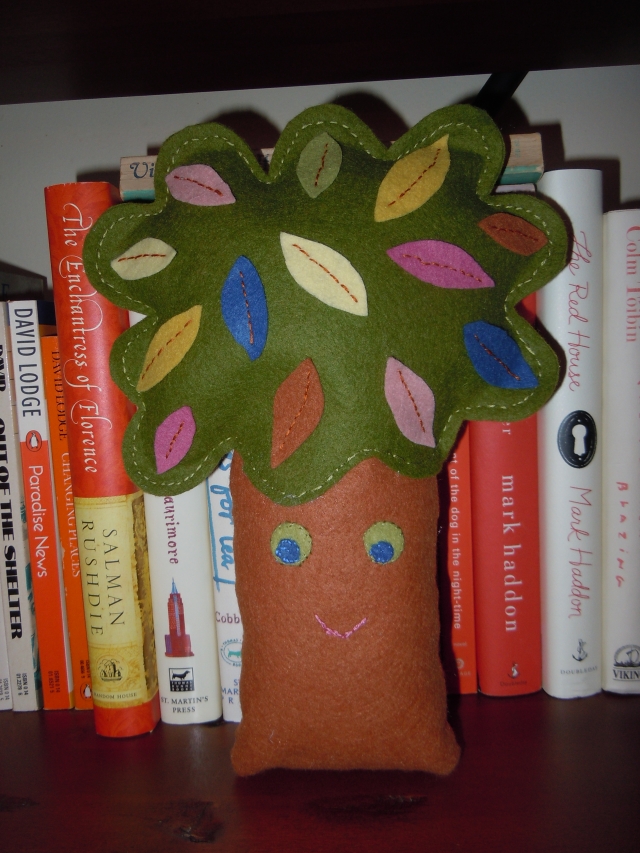 The treeling, which I’m enjoying greatly, is going to be a birthday gift…

Then I took a family portrait. I have a feeling I’m only getting started here.

Cake, treeling, tooth! What could be next?

8 Responses to Sowing and Sewing: A Winter Harvest