I was away part of this week in Green Bay because my Aunt Emogene, known as Gene to most people, died late on June 15th. Her daughters had warned us this was coming, so we were as prepared as we could be for the bad news. 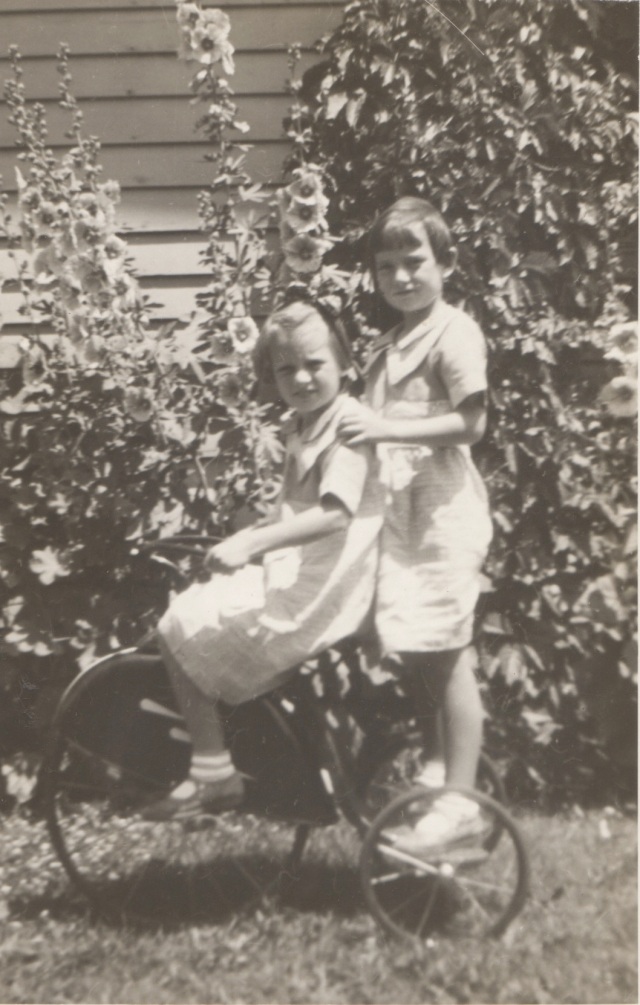 Gene was closest in age to my mother–a year and 11 days older. Aunt Mabel had had the roost to herself for six years before Aunt Gene came along and then with my mother following so quickly, she was thrust into the role of older sister. Apparently my mother and Gene were little terrors and broke all Aunt Mabel’s doll dishes and tea set. Who knows what other sibling crimes were committed? 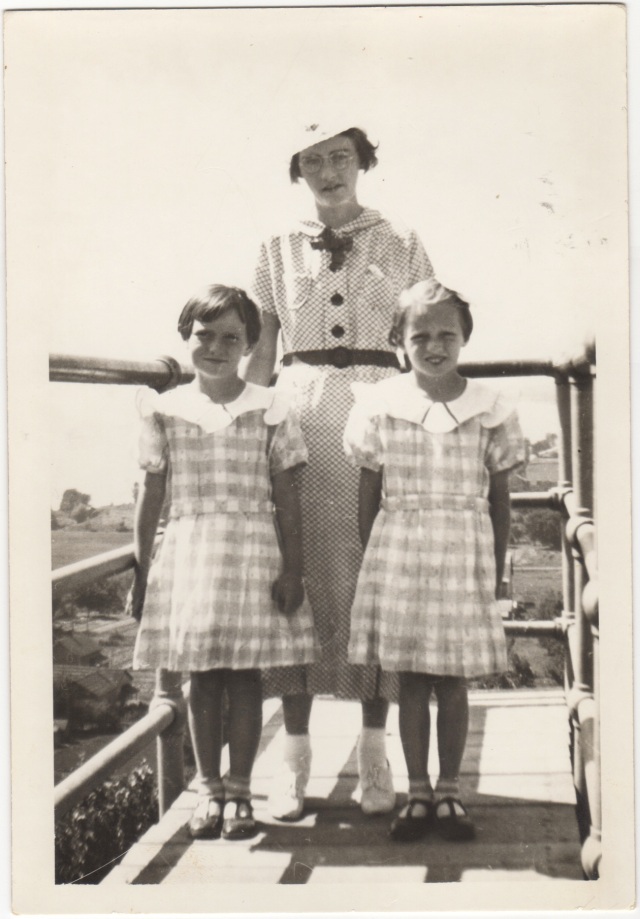 My mother, Aunt Mabel, and Aunt Gene July 4, 1936 on an overlook at Lake Winnebago. 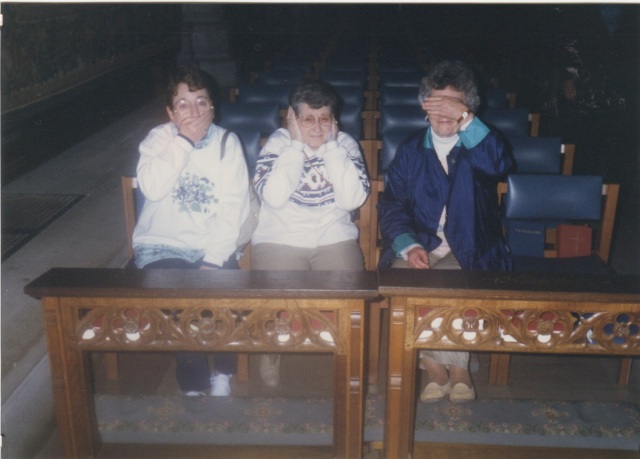 When Aunt Gene and Uncle Vic visited, or we went to visit them, we knew we were in for a good time. Mom and Gene were close, and Dad and Uncle Vic were both farm boys who had served in the U.S. Navy in the second World War. How they all laughed when they got together–and what a boon atmosphere that was for us as kids, surrounded by all that laughter and love. 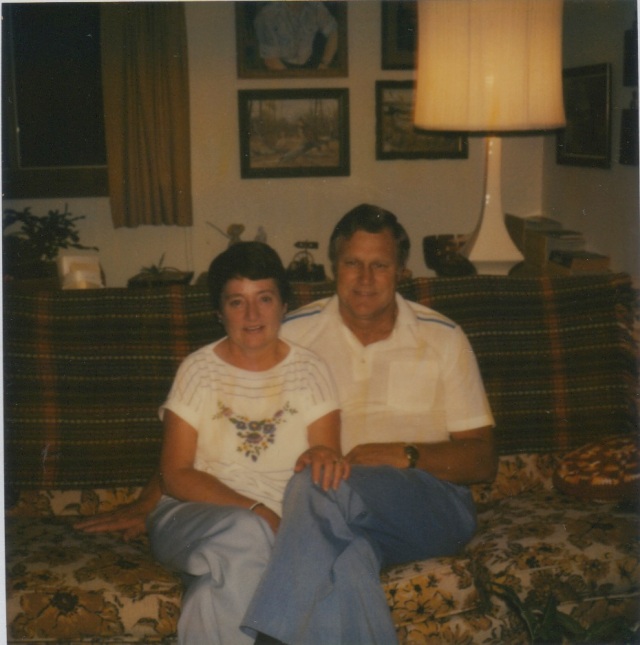 Aunt Gene was widowed in her late fifties after almost forty years of marriage. She was 19 when she married Vic and she was fond of telling the story that he had been to war, but had to get his mother’s permission to marry because he wasn’t 21 yet. As a woman who had focused on her children and home and then her grandchildren, she might have gone adrift at this loss. But she leaned on her friends from church and stayed connected to her community. She went to see friends in Arizona. With two friends and Aunt Mabel, who was also widowed by that time, she rented a condo in Florida one winter. Because she was tiny, there is apparently a picture of her in the trunk of the car the ladies rented, extracting a suitcase that was pushed too far back for anyone to reach.

Aunt Gene was impish and sparky. She could seem so pleased to be with you that she just leaked good humor. She could be very funny and she might say just about anything. One of her grandchildren was telling a story at dinner the night before the funeral and either her mother, my cousin Vicki, or her aunt, my cousin Allison, said ‘You’re not telling that tomorrow are you?’ 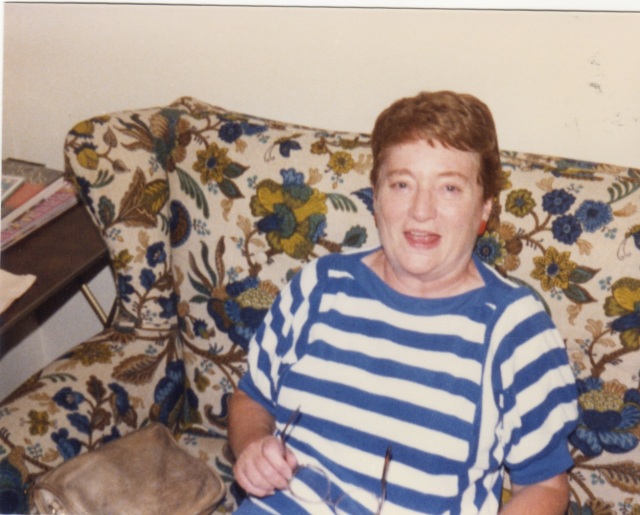 She was laughing about something here, but I don’t remember what.

I was fortunate that my cousin Allison and her husband moved to Virginia, because I got far more exposure to Aunt Gene and Uncle Vic than I might have otherwise. She and Uncle Vic came often and after he died, she continued to fly out, at first with my cousin Vicki’s children and then by herself. 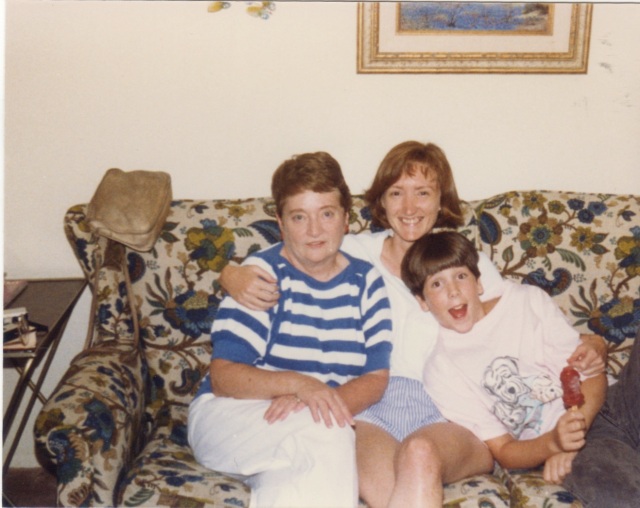 With Aunt Gene and Talley, my cousin Vicki’s daughter at Allison’s in 1987. Talley now has her own 12-year-old.  And that’s MY ratty purse thrown on the couch…

She had a hard year this past year and died on my cousin Vicki’s birthday, which, frankly would be  hard to take. My own birthday was three days later and kind of hard to focus on given the loss. But children, grandchildren, nieces, nephews, a sister-in-law, sister, and lots of friends came together to see her off. We were lucky to have soaked up all that love for her 87 years. And then 14 of us went off to Bay Beach, which she loved, and finished up with dinner at Sammy’s, her favorite restaurant. As my own niece texted me recently on her birthday “Thanks for the love.”

Vicki, Allison, my brother Scott, and me–trying to stand as tall as my older cousins in 1963.

This entry was posted in Community and tagged death, family, love, mourning. Bookmark the permalink.

38 Responses to Love, Loss, and Family