A Little Wine, A Little Regional Tourism, A Little Family

I spent a few days in Fredericksburg, Virginia with my cousin last week as part of my mostly stay-cation. Fredericksburg is a lovely old town on the Rappahannock River (yes that of the famed oysters). It is the site of Ferry Farm, where George Washington grew up, and Kenmore plantation, where his brother-in-law Fielding Lewis helped finance the American Revolution with his merchant wealth and his fleet of blockade runners. 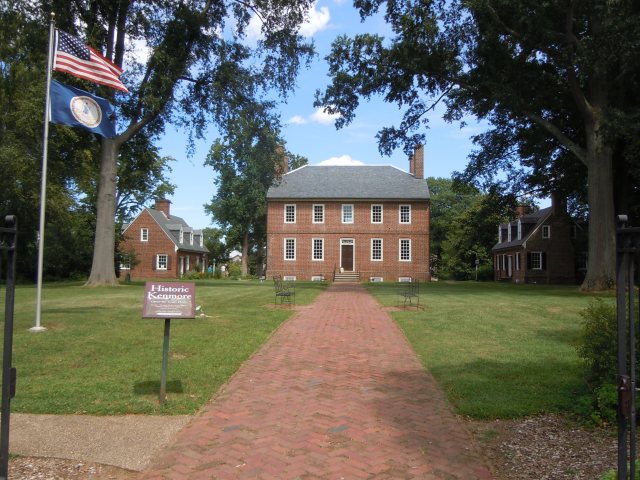 The entrance to Kenmore. See the link to the site to see the plaster work.

If you are a Civil War buff, it is absolute heaven, with everything from the Chancellorsville and Wilderness battlefields and sites to Ellwood Cemetery where Stonewall Jackson’s arm is buried (I’m not kidding). 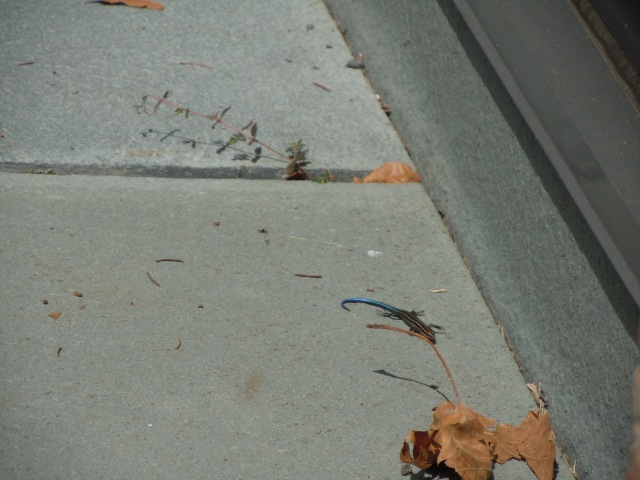 This is not Stonewall Jackson’s arm’s grave marker. It is a little lizard at Montpelier. Isn’t his blue tail something?

It is also very close to Montpelier, James and Dolly Madison’s home, and smack in the middle of some fine Virginia wine country, fulfilling one of Thomas Jefferson’s fondest hopes. 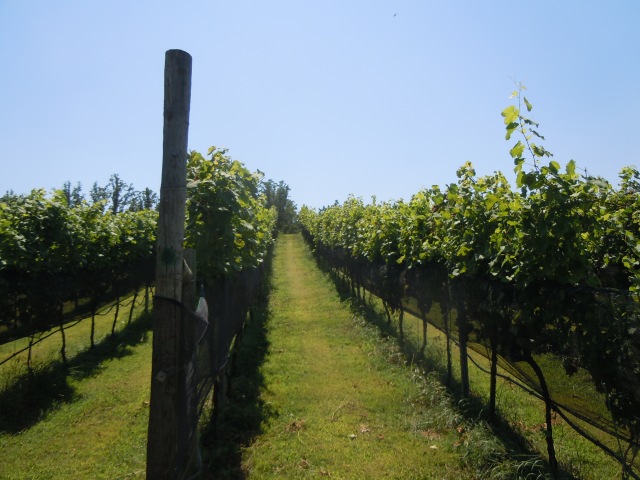 We saw acres of grape vines… 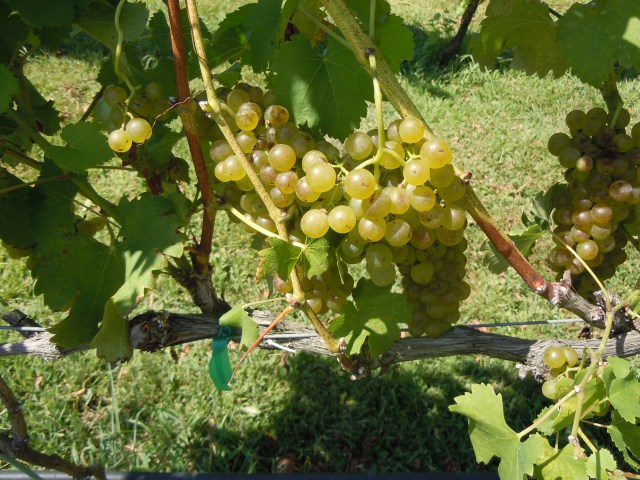 …and some very nice bunches of grapes.

Like parts of West Virginia, it also has a substantial arts community, attracted originally by its relatively low cost of living. The Liberty Town Arts Workshop was a lovely stop in between historic homes and glasses of wine. It has works by potters, paper makers, weavers, painters, glass blowers, and sculptors. It also has classes in many of those arts and crafts. I was unable to resist two pottery vases, a mug, two handmade paper cards, and a beautiful woven dish towel. There was a whole roomful of looms. 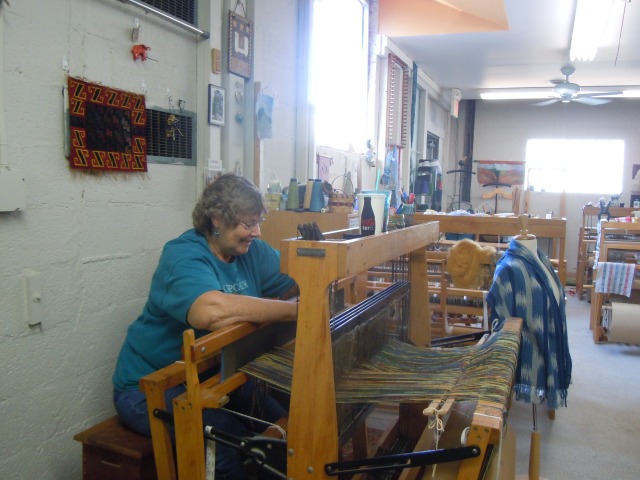 This is Linda George, spinner, weaver, and knitter, threading her loom for a wool blanket. 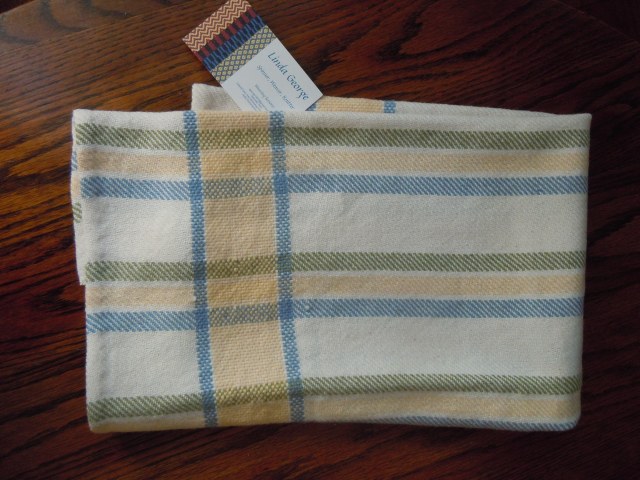 And this is a towel she wove, that I now have in my kitchen.

We combined touring some old homes with visiting wineries and eating good food. Kenmore Plantation, on the edge of town, was fascinating. A typical, symmetrical center hall colonial, the house had very elaborate plastering and carving. Like most large farming endeavors in the south at that time, the plantation depended on slave labor. It also had rooms one would never see and doors one would never enter if not a member of the gentry. Tradesmen, visiting captains of Lewis’s fleet of ships, and hired farm workers had their own door. It gives me pause to reflect on the severe stratification of society at that time. (I have always been amused by people who wish they could have lived in a time when there were servants, based on a usually unfounded assumption that they would be the ones being served.) 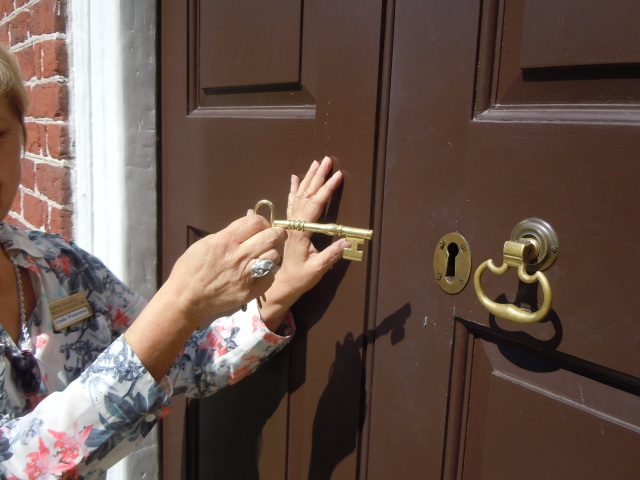 This is the key to the front door of Kenmore, wielded by our tour guide.

Nonetheless, these are people who made great sacrifices, in Lewis’s case losing his fortune supplying the revolutionary army. Another thing that comes clear is how smart and skilled and independent the women of these houses had to be. Often they were running large concerns while their husbands were away, educating children, and in some cases debating Enlightenment thinking with their husbands in letters. Abigail Adams, though running a farm in New England, is famous for her letters to her husband at the Continental Congress urging him, among other things, to “remember the ladies.” 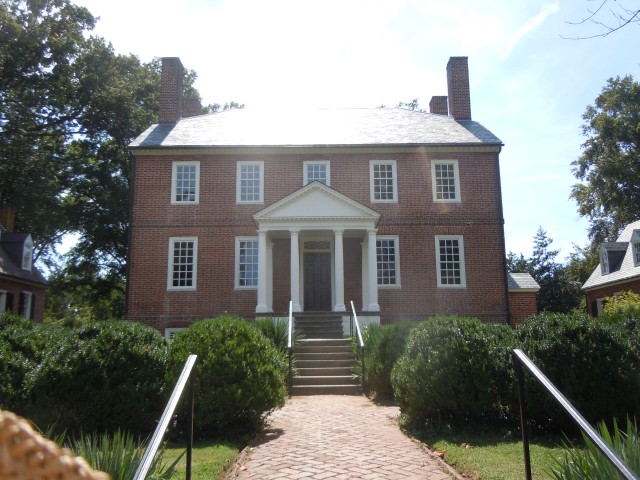 This is the garden side of Kenmore. Apparently the pillars are not original to the structure.

This was my second visit to Montpelier, James and Dolly Madison’s home. I had come when it first opened to the public a number of years ago. Since then, curators have done more research, archaeology, and acquisition. The grounds contain the family cemetery, where Madison is buried, a slave cemetery, and extensive gardens, both formal and natural. Madison is most known for strongly shaping the new Constitution and being an intellectual force at the Constitutional convention. Along with George Mason (with whom some bloggers posed in April), he is known for shaping and championing the Bill of Rights. He and Dolly were the first husband and wife political partnership in the new nation and she was the first spouse to be called “First Lady.” One political opponent is reported to have said that he could have defeated Madison alone, but not the two of them together. 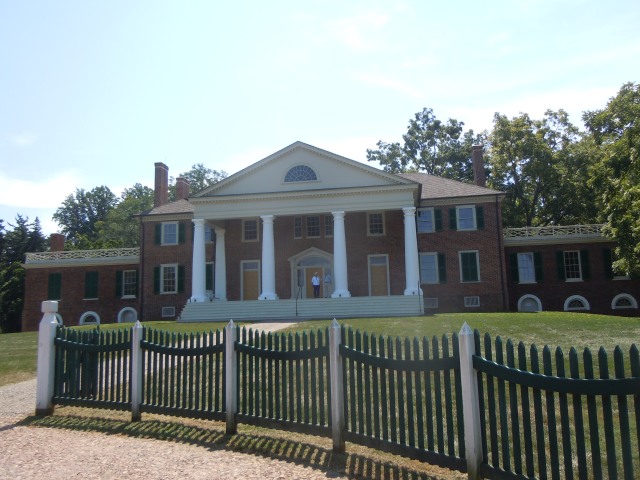 Here is the entrance to Montpelier, with two of our guides waiting to meet us. There was an enormous praying mantis on the porch above the second story windows. 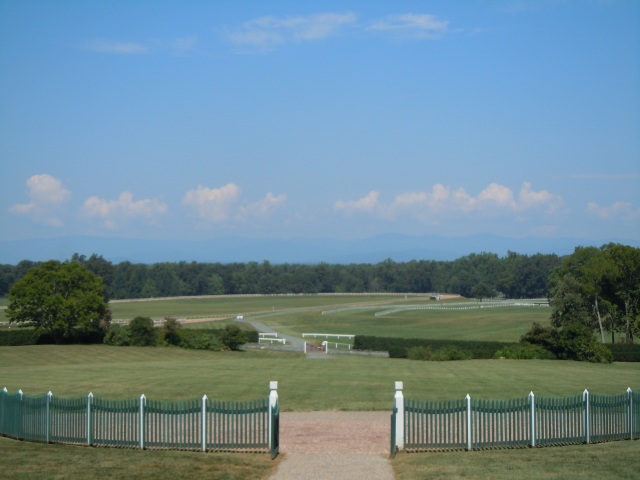 This is the view from the front porch. Between the tree line and the clouds, you can see the “Blue Ridge” of the mountains.  The grounds are used for steeple chases, hunts, and jumping events, the legacy of the DuPont family, which owned the house for  80 years before donating it to the National Trust for Historic Preservation.

Now the new nation had to have building materials, and L’Enfant himself found the site of what is now Government Island. At one time, it supplied the sandstone for the Capitol and the White House. It was easy to carve, came out whole in the cutting (as opposed to splintering), and had an enviable location on Aquia Creek, where it could easily be transported to Washington. Today, it is really a wetlands preserve with some lovely shaded walking paths and a nice variety of plants and birds to see. 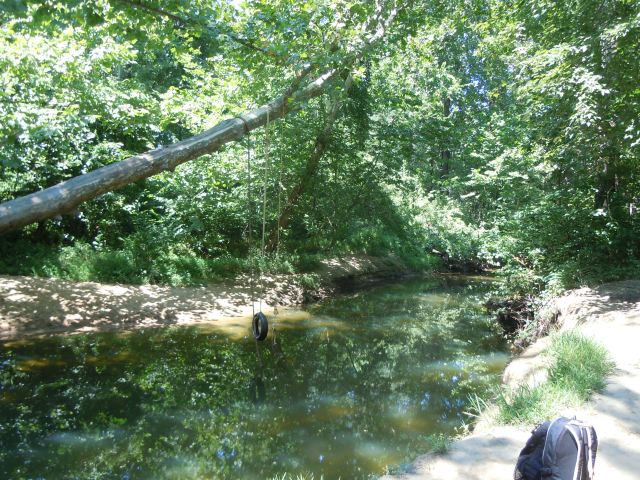 Walking in, we noted that Aquia Creek appears to be a local swimming hole. 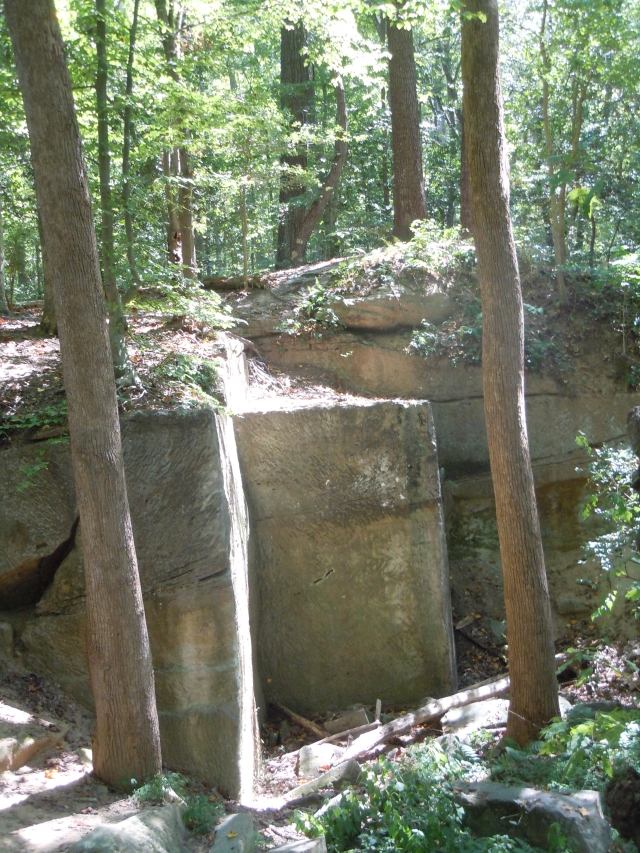 Deep in the woods, we found the sandstone outcrops. 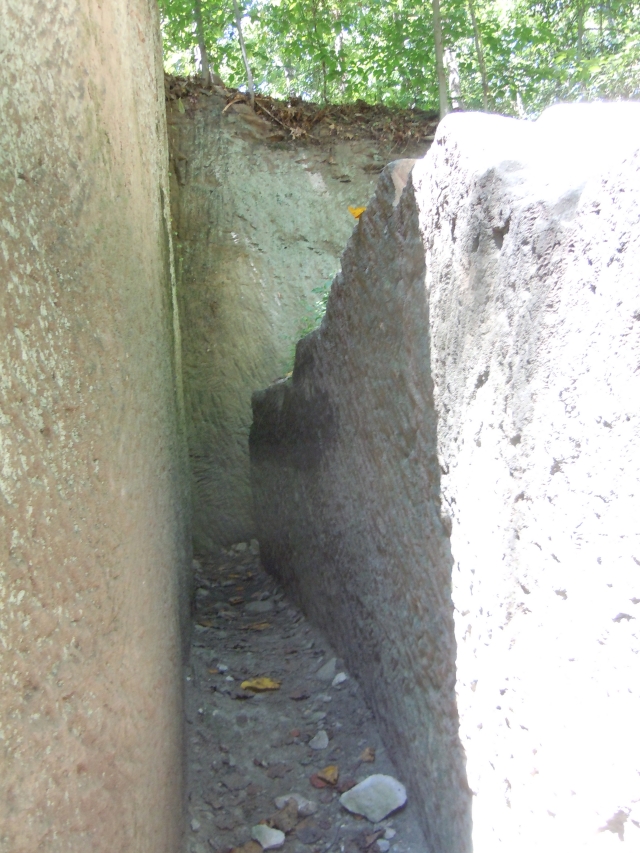 Quarrymen would carve around a piece of rock, then slice it out and down.

Before the Quarry, we visited Potomac Point Winery for a tasting and some lunch. All in all, we had a few days of lovely local tourism and some very nice wine and meals. 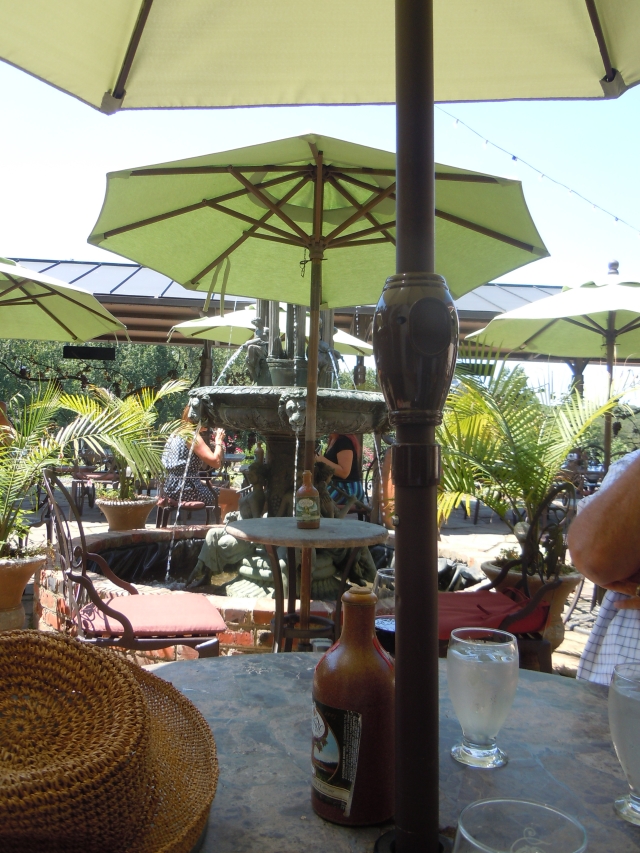 Our shady table had a view of colorful umbrellas. 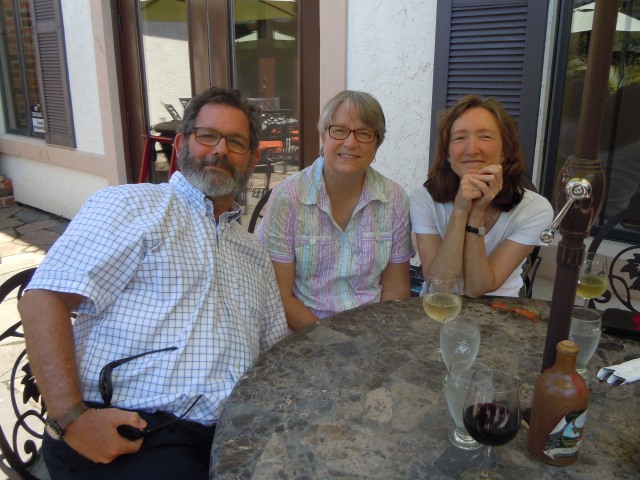 Our waitress was kind enough to take our picture.

34 Responses to A Little Wine, A Little Regional Tourism, A Little Family