A Conversation Interrupted By 40 Years

Posted on September 9, 2015 by arlingwoman

I left high school forty years ago this past summer like a train shooting out of a dark tunnel. Man, was I happy. I could not wait to get the @#$% out of there and start my life. And I did. I went to college and moved half way across the country to go to graduate school. I made new friends, kept in touch with old friends, got engaged and lost my love to a car accident. I got jobs, moved forward, enjoyed life and struggled with it. All the while my high school classmates were doing the same thing: working, making lives, expanding families, staying in touch. 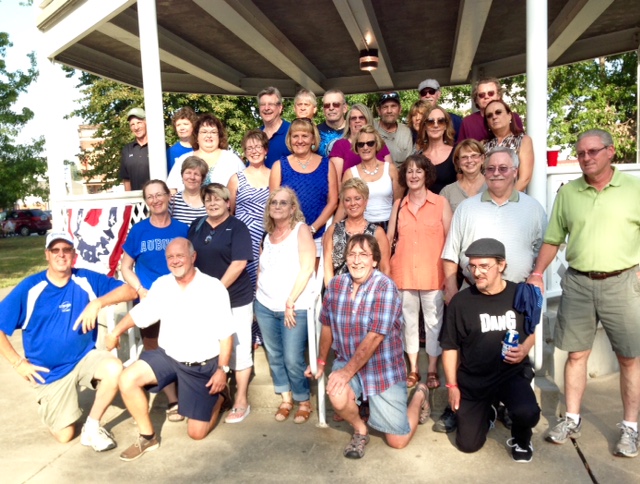 Class members who were at the street party.

The first reunion was too soon and at a country club quite a few of us couldn’t really afford. The second one, after some back and forth about what people could do, happened when Tim Seifert said it could happen at his barn. Every last one after that has been at his farm, where there is now a new house and a party room. 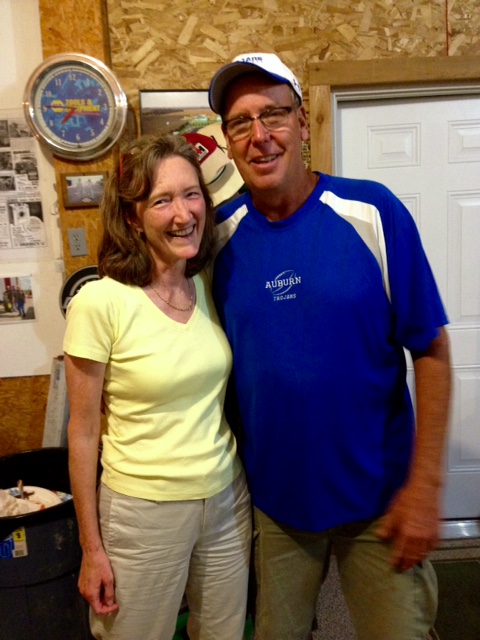 All the while, for each reunion, my friend Cammie kept making sure organizers had my name and address, later my email. She sent pictures of each one and told me how much fun they were. 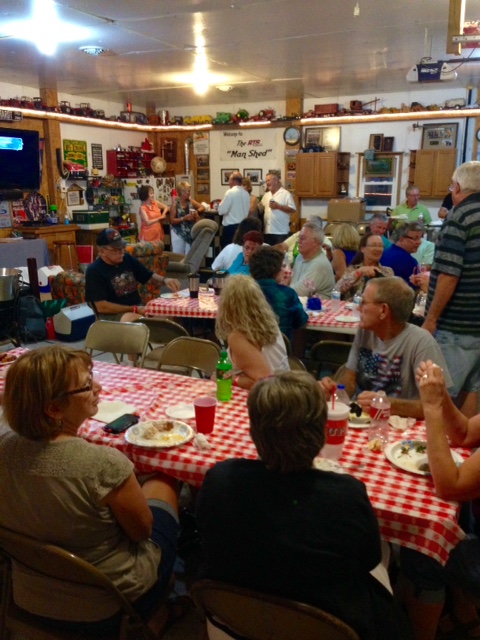 The latest party at the farm in the “man shed.”

At the 20th, two people who had been a very hot item in high school, then married other people, met again after their divorces and fell immediately head over heels again. They’ve been married for 19 years now. 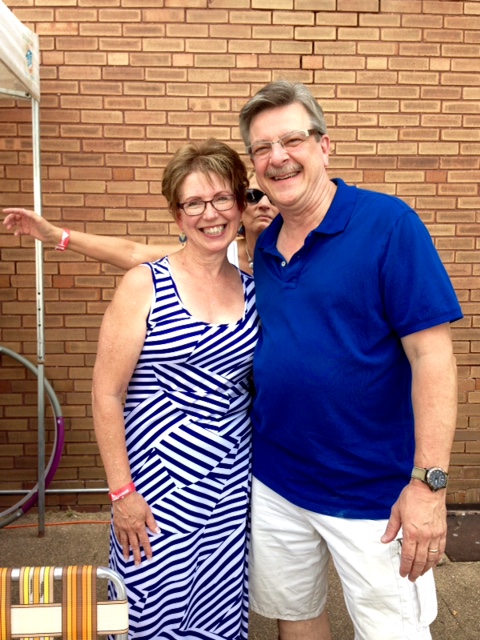 Kathryn and Russ run a legal practice together.

I kept putting Cammie off. It wasn’t that I didn’t go back. My parents were there and my mother, brother and sister-in-law still are. I just wasn’t ready. Then about 15 years ago, my friend Kandy got involved. So each time there was a reunion, it was Cammie, Kandy and the emails from the organizers. Cammie is a gentle persistent person. Kandy is a force of nature. After fifteen years I gave in. 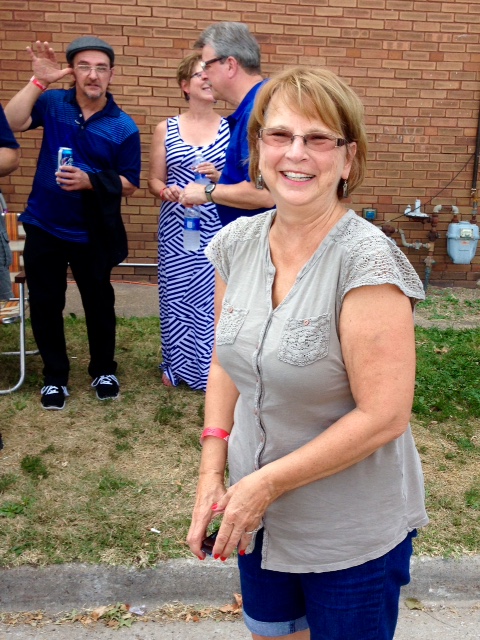 Jean is also a major force in these things, organizing and herding…

Part of it was the sheer insistence that I would have a good time. Part of it was also the knowledge that we have a limited amount of time to do this. Several people have been sick in the past few years and a few have died. Each time we rallied round via email, letters, and now Caring Bridge, to let people know we remembered and cared. I began to realize that it might be better to give some hugs and hellos to people and that it might in fact be fun. So I RSVP’d that I’d be there. Did I say that these folks hold our reunions over the Labor Day weekend when those who have moved away have a better chance of making it? 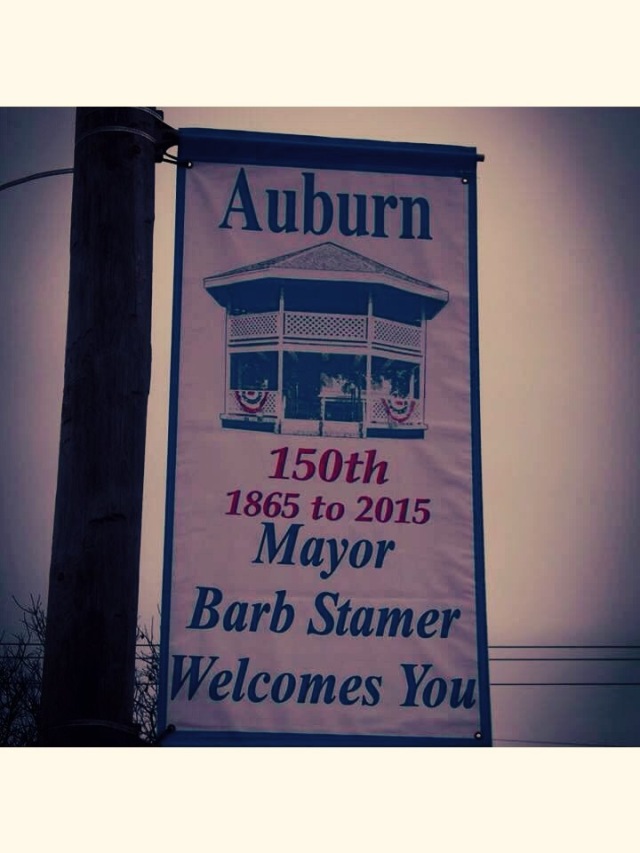 I was also interested in the sesquicentennial of the little town I grew up in. I remember the centennial clearly because my father, who was not a hairy man, yielded to the necessity to grow a beard and sported a goatee and moustache for the duration of the celebrations. Kandy’s mother is now mayor of the town and, well, speaking of forces of nature, she was organizing a celebration! 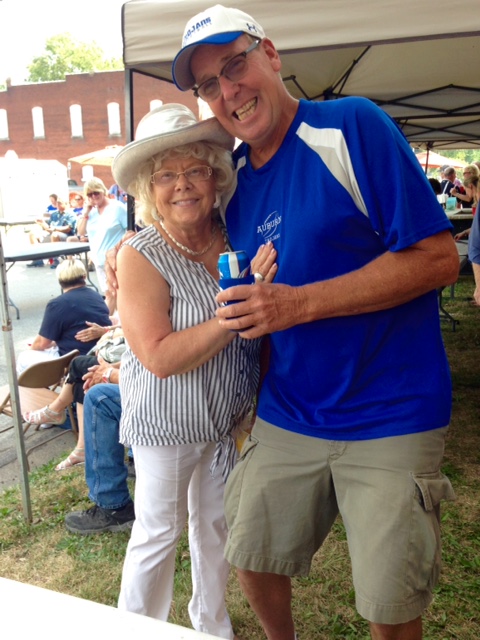 That Tim, he gets around, but so does Mayor Barb!

It grew to include a parade with floats, 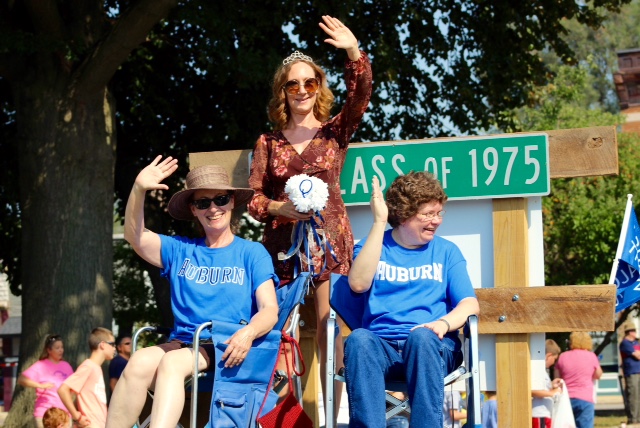 my classmate Gregg’s band, Dang, and what appears from photos to be one devil of a street party. 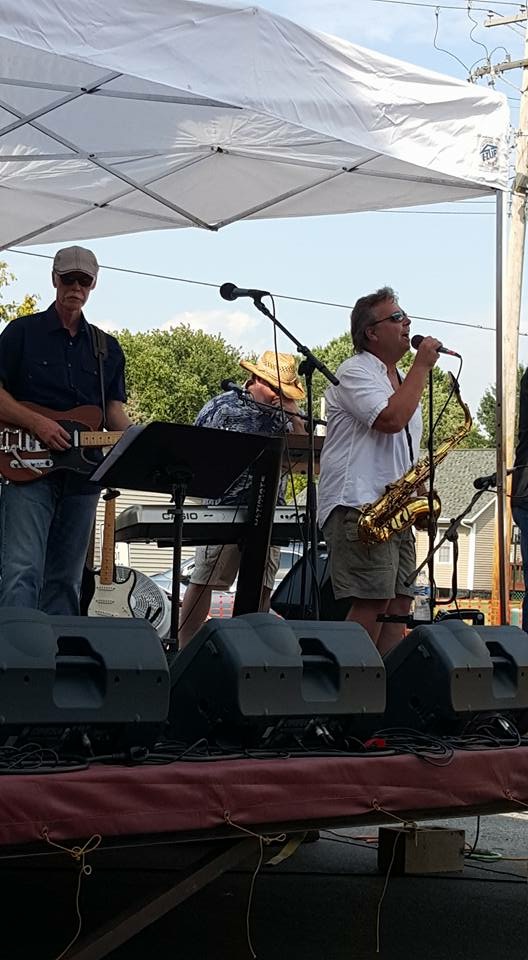 Gregg (l) brought his band up from St. Louis.

There were even hula hoop demonstrations. 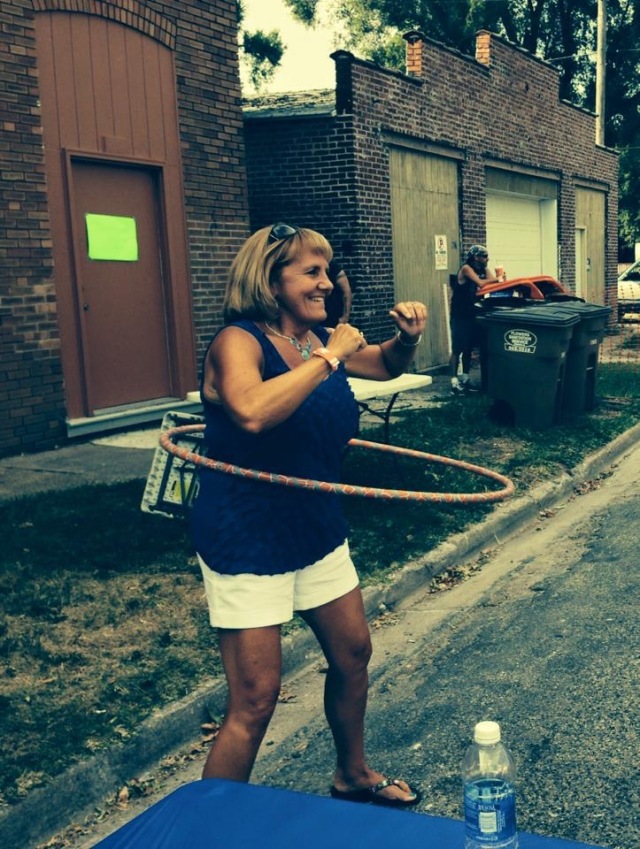 I had intended to be there for all this, but, alas, the airlines had other ideas. I managed to get there for the party at Tim’s farm, but missed the 150th anniversary events. I saw people I hadn’t seen for forty years. Some of them looked exactly the same. 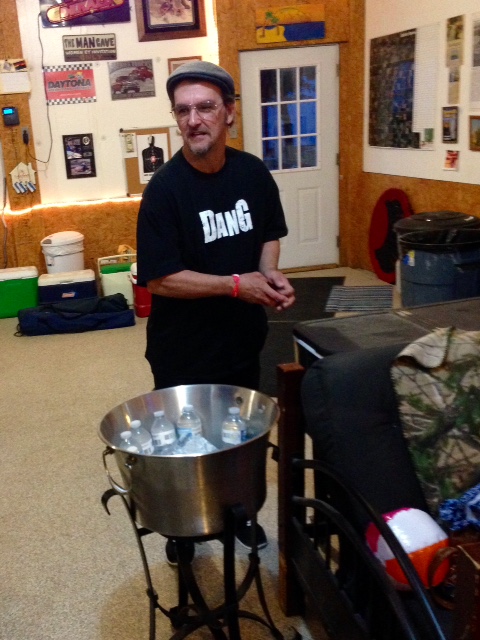 Mike, I don’t want to reference Dorian Gray, but geez…

We caught up with each other and exchanged notes. 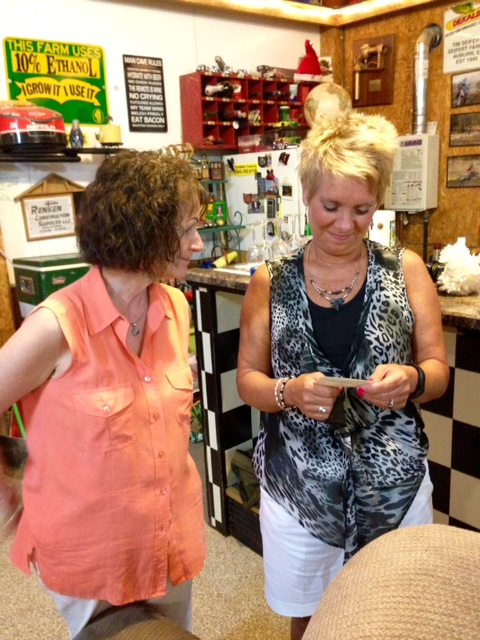 Liz and Candy catch up.

Some of us put on funny hats. 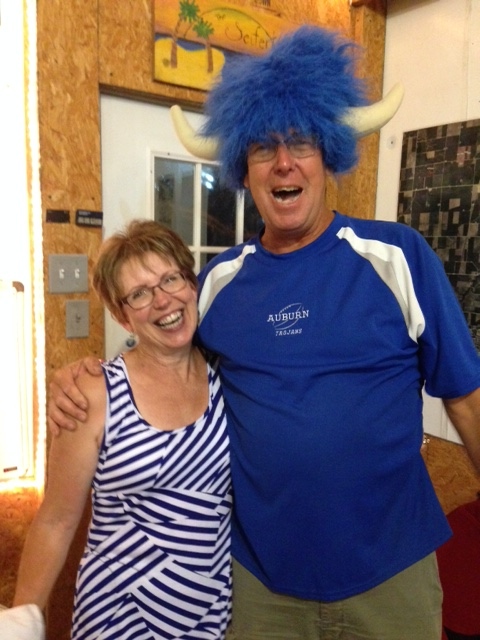 Okay, Tim put on a funny hat. After he tried to get Kathryn to put it on.

Some put on shirts they wore in eighth grade… 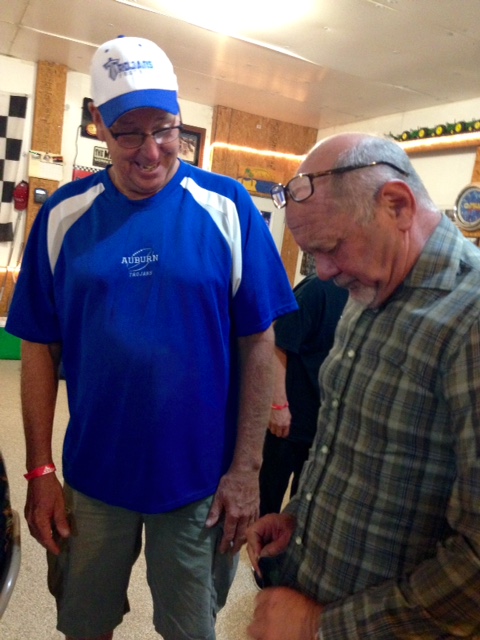 …while others looked on in amazement. 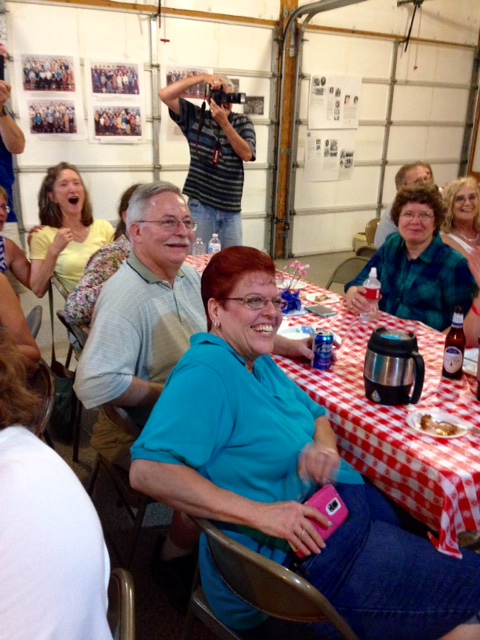 Some of us were caught in the act of taking selfies. 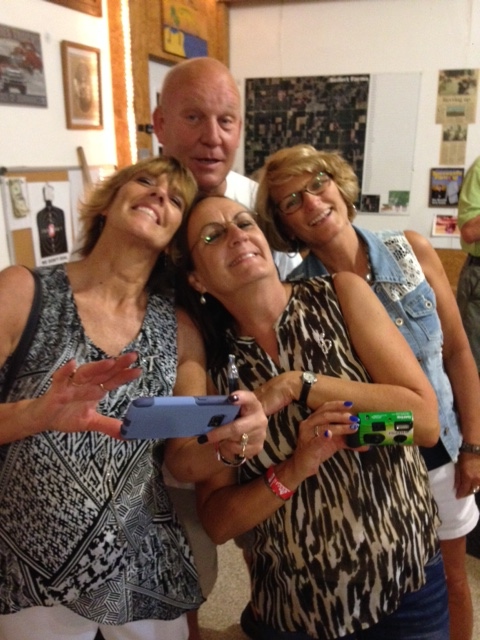 I should add that while this was a high school reunion, many of us have known each other practically since the beginning of…well our time. 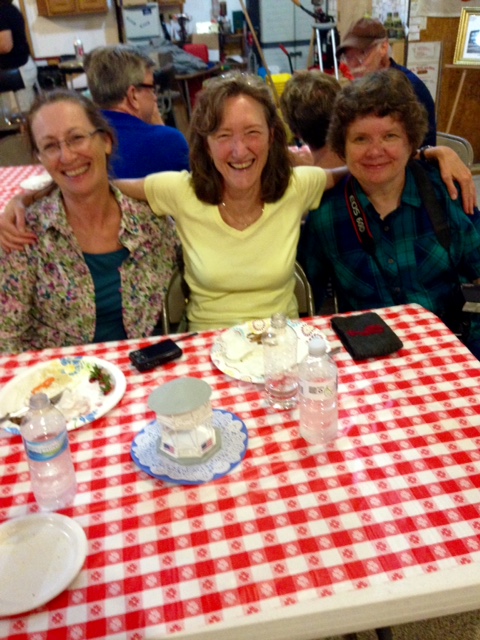 Sara, Cammie and I have been friends since Kindergarten.

I talked to the person I sat next to the whole year in Mrs. Carter’s first grade class. He owns a farm implement company and has a son who’s a CPA. And I once cracked his head with Fred’s in the coatroom. They were good enough not to tell on me. 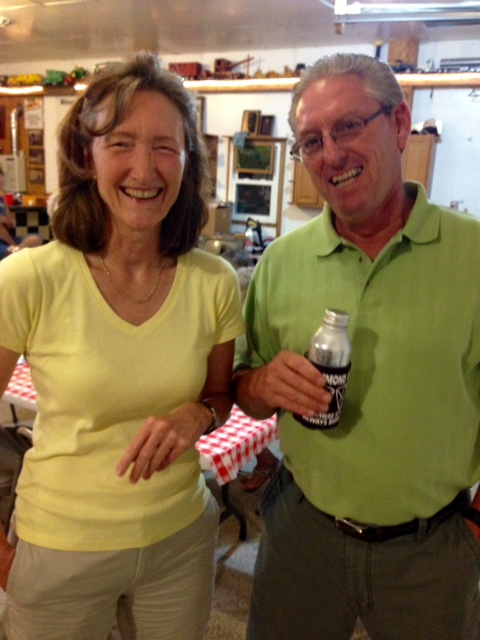 Les made me point myself out in our class pictures.  I don’t think he remembered me.

I am an introvert, so a party is something I have to prepare for. I did not get to talk with everyone I would have liked to, but we all have each other’s email addresses now. I think I’ll be in a little better touch. (All photos except the third by Kandy/Jim Bernal.)

This entry was posted in Community and tagged Auburn Class of 1975, High School Reunions. Bookmark the permalink.

37 Responses to A Conversation Interrupted By 40 Years