Of Magic, Reality, and Equilibrium

A poem posted by The Little Old Lady Who on Friday got me thinking about illusion, magic and reality. Her poem on some level was about Christmas decorations and the differences between what they look like lit up (and inflated in some cases) and deflated flat on the grass in the morning or with nicks showing in the plastic in daylight. 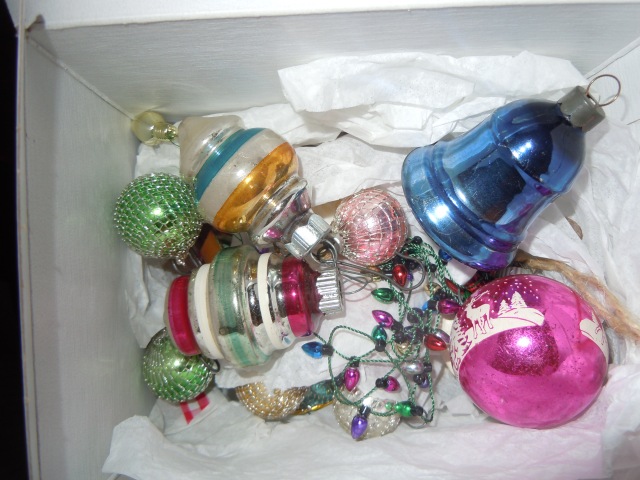 I brought out some of my Christmas decorations this week. Some of them are quite old for what they are, dating to my childhood. 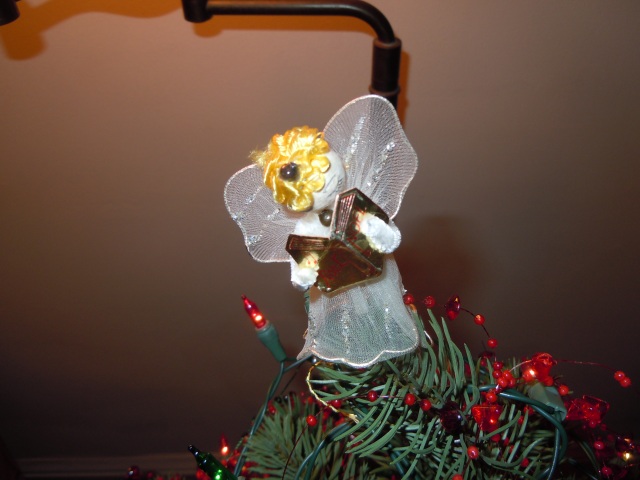 This angel came on a package for me my first Christmas.

These elves, which have pretty ghastly complexions, were the height of Christmas magic for me and my brother.

There used to be a purple one, too, but it went the way of many ornaments…

Some are hand made. 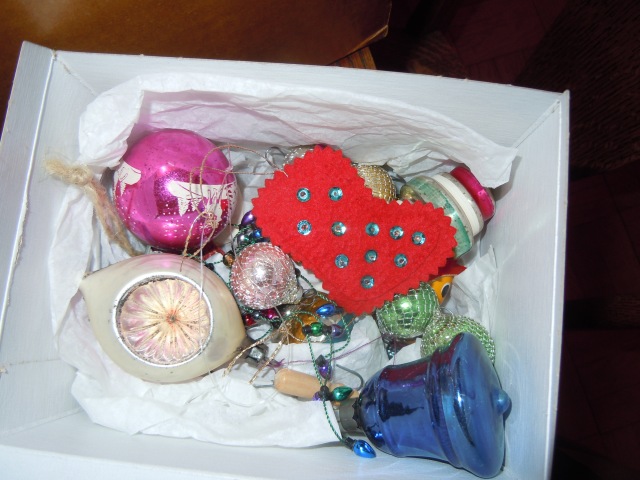 I’m not sure whether my mother or one of my aunts made the sequined stocking.

And I made more votive stars and a sun!

Some look a little worn if I look too close.

A bit speckled, even for an owl…

On the other hand, hardly anyone looks that close. The ornaments come out, go on the tree, sparkle in the lights and get wiped off and put away after the Epiphany. We grant them their short-lived power in the same way we suspend belief at a carnival. Look too close and you’ve pulled back the curtain on the wizard; or don’t look too close and accept that the wizard is back there. It’s okay. 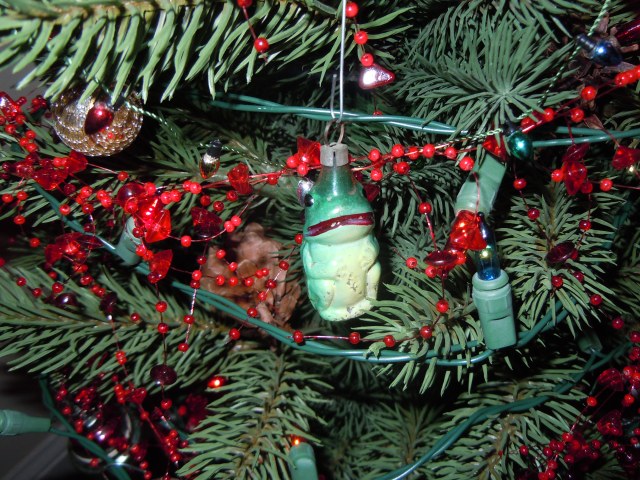 The frog appears to have been in some scrapes…

I think this carries over to other aspects of life as well. I went to the garden today because I knew I had some lovely parsley and greens and I thought I’d harvest some. I also wanted to check in on my cold frame lettuces. 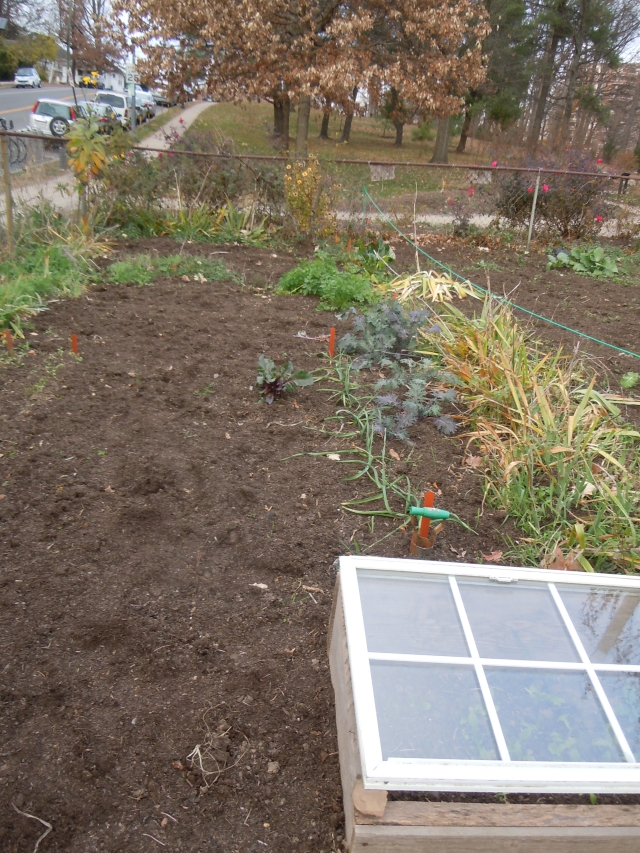 My kale was beautiful. Some of the leaves looked sucked a bit dry though and on closer inspection I saw that most of them were covered with the nymphs of harlequin bugs. Enough that I figured it would be hard to wash them all off. Even though an entomologist friend of mine says we eat bugs all the time (eaten wild mushrooms? You’ve had fly eggs…), I’m not all that keen on it. So, illusion of perfect kale, reality of…

I did harvest some beautiful chard and some abundant parsley.

Then I had a wander around the garden. Don’t we all have the perfect garden in our heads when we think about gardening? Beatrix Potter illustrations of straight rows of perfect little vegetables. When I see anything approximating it, I am astonished, pleased at such near perfection.

Still, every year I’m thrilled with the exuberant, unruly lushness of my garden. It’s nothing like an illustration. And while many gardeners put their plots to bed, others simply abandon them at some point, so that over winter the plots look derelict. The collapsed fencing, skewed stakes and stacked rusty coffee cans lend it the look of a dump…if you’ve never seen a garden in winter.

Next to our community garden, up the hill, is a labyrinth. For some years, it was in the meditation garden of Whitman Walker Clinic in Arlington, which served people with HIV. When the clinic closed, the labyrinth was offered to the county, which took it and held onto it for a number of years while looking for a site. Three years ago, the county installed it in the park next to our garden.

I have walked it periodically. It is a nice setting, and being a public park, it sees use by children, who scamper into its center and drag sticks along its paths, people who simply come to sit, people walking their dogs, and people who know the labyrinth and its use. I imagine it could be a place remembered by a child as magical and mysterious. 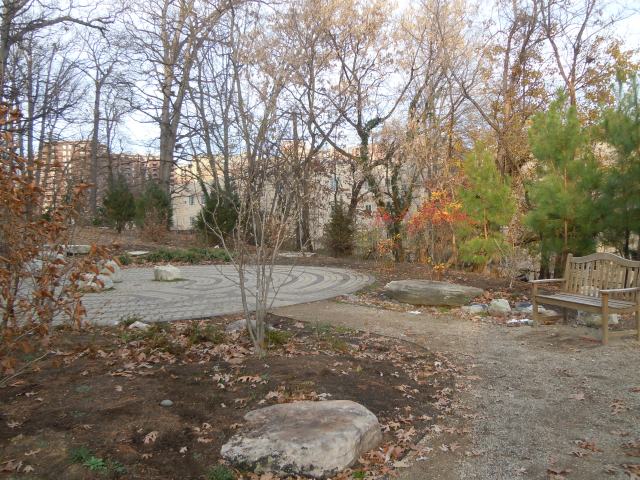 This time as I came to the entrance of the labyrinth, I saw that some of the park denizens had left spoor. There’s been a lot of drinking in public in this little park and all the litter that goes along with it.

I had a walk to the center, where someone had dropped a rose. Then I picked up the litter. 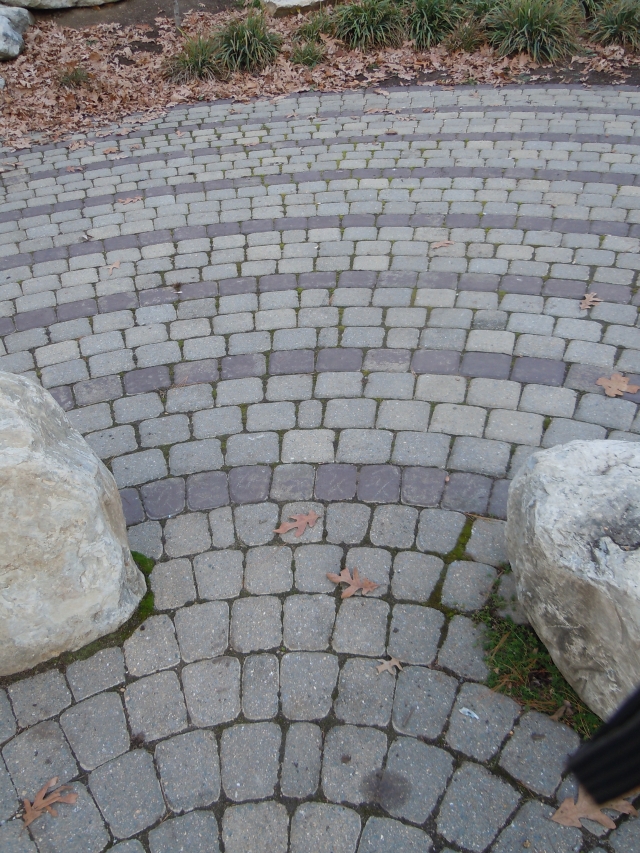 Standing in the center looking out is like being in one of those old maps of the world looking to the outer edge.

There’s nothing wrong with having that image of perfection or magic in your head. Sometimes you get it for a brief flash and sometimes you don’t. But the knowledge of imperfection, wear, tawdriness and worse is a good thing to have, not because the world is a horrible place, but because part of keeping equilibrium means not getting blind-sided. The amusement park full on, brightly lit in a blanket of darkness is a different thing than the one in early afternoon with the electrician repairing the bumper cars and the carpenter gluing an ear back on a carousel horse. We need both.

31 Responses to Of Magic, Reality, and Equilibrium