Last Friday morning I scored a tour of the Old Naval Observatory from Stephen Randolph, the historian of the U.S. Department of State. I’ve been wanting to get inside this place ever since I first saw its dome rising among other buildings in Foggy Bottom. Back then, it still belonged to the Navy and I would have had no hope of getting in there unless I knew someone in the Bureau of Medicine and Surgery for the Navy.

As it happens, current connections enabled me to email Dr. Randolph, who was happy to walk around with me and talk about the long and illustrious history of the place, which now houses State Department offices in the buildings that have been refurbished.

Dr. Randolph in front of a statue of Benjamin Rush, who advanced medical science in the early years of the country.

We started our tour in front of the observatory building, where Dr. Randolph pointed out the topography of the site, which is on Pierre L’Enfant’s plan for the capital city. Apparently George Washington thought it would make a good site for a national university. It was on high ground by the river and sloped gently down on all sides. The topography is greatly changed since the L’Enfant plan; the E street expressway has interrupted the slope, and the course of the river has also changed due to construction on the shoreline and other activities in what was once the port of Georgetown. These activities slowed the current of the river and created conditions for malarial mosquitoes to thrive.

Looking NE from the Observatory, you can see the slope is no longer as gradual.

The site never became the grounds of a national university, but in 1825, John Quincy Adams signed a bill for an observatory to be established. Nothing happened until the 1840’s. By that time Adams, who had been a president and a secretary of state was in the House of Representatives for his Massachusetts district. In the meantime, the site was a depot for the navy where it repaired and calibrated navigational instruments.

Victory at last! I get ready to head in to the Observatory building, which was constructed between 1844 and 1847.

When money was finally appropriated for the observatory, James Gilliss, a navy lieutenant, was given the job of designing it. He traveled to observatories in Europe and bought necessary equipment. He was not, however, to become the first superintendent of the observatory. That job was given to Matthew Maury, another naval officer, who held the position from 1844 to 1861. In his first years at the observatory, Maury often received visits from John Quincy Adams, an amateur astronomer as well as past president. Maury had the first American time ball installed at the observatory. These balls would drop at mean solar noon and were used to verify the setting of marine chronometers, whose accuracy is essential for determining longitude at sea. When the telegraph was established, they also served the railroads in keeping time. The time ball is now gone, but others are still in working order at the Greenwich Observatory in England, in Port Lyttelton, New Zealand, and the Titanic Memorial in New York City. 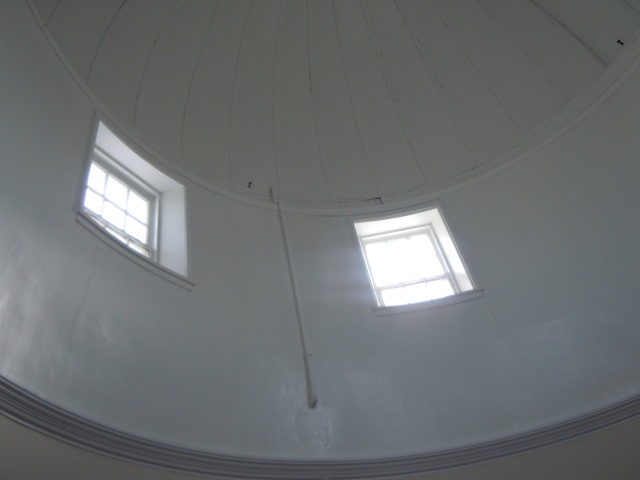 Part of the dome where the first telescope was housed.

During his time at the observatory, Mr. Maury, who was not an astronomer, but an oceanographer–what was then called a hydrologist–worked to improve navigation, charting tides and currents in the ocean, noting weather and wind patterns, and helping to get international agreement for reporting captain’s observations from the logbooks of voyages. Graduates of the Naval Academy came to the observatory to learn navigation. By the time Maury left the position, his work had contributed to shaving two months off the average voyage to the far east. When the southern states seceded in 1861, he resigned his commission to join the Confederacy. He spent the Civil War in London buying ships for the Confederacy and afterward served at several universities and was instrumental in establishing what is now known as Virginia Tech at Blacksburg. 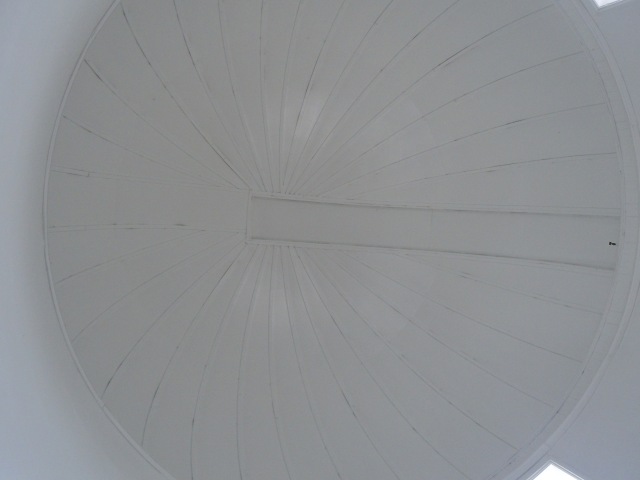 Another view showing where the telescope would point out of the roof.

During the Civil War, Abraham Lincoln is said to have visited the observatory at night to observe the stars. The first visit was in a carriage with other guests. Subsequent visits he came on foot or horseback alone. During the 1860s the entire area of Foggy Bottom was a military camp. I can imagine him stopping to talk to anyone who was awake in the wee hours of the morning. 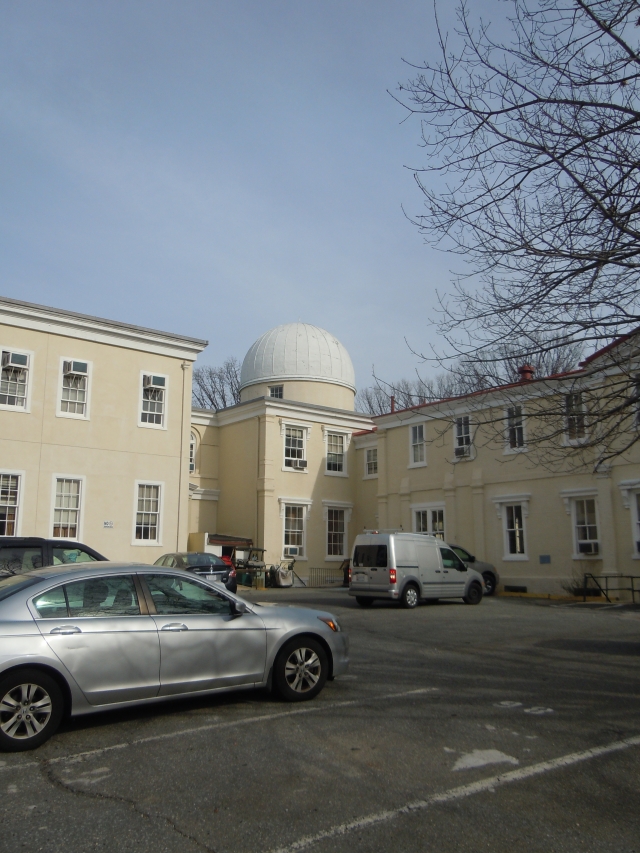 View of the building from the rear. To the right is the extension where the new telescope was housed.

In 1873, a new telescope was installed in an addition to the observatory. It was 40 feet long, had a 26 inch lens and was the largest refracting telescope in the world for a decade. It was with this telescope that Asaph Hall discovered two moons of Mars, Phobos and Deimos in 1877, making the observatory one of the leading astronomical laboratories on the world.

This is the extension built for the new telescope. It was later used as a library.

In 1893, worn down by large numbers of staff contracting malaria, the Navy moved the observatory telescope to its current site at Massachusetts Avenue in Washington. The telescope that had aided the discovery of Phobos and Deimos was remounted in a new dome with a rising floor that brings viewers up to the eyepiece. It is still in use with some upgrades to add photographic capability and is used to view double stars, planets, and their satellites.

The ceiling of the new extension as sealed after the removal of the telescope to its new housing.

The Navy then moved the Bureau of Medicine and Surgery to the site and it began a long history as a medical facility. The Naval National Medical Center, now in Bethesda, moved from here and at various times the National Institutes of Health and the Surgeon General’s offices were housed here.

This building, currently being remodeled, was a hospital for mariners.

It also housed the Office of Special Services, providing office space for “Wild Bill” Donovan in the second world war, and the offices of the newly formed CIA in the years after.

Allen Dulles had his offices as the first civilian director of the Central Intelligence Agency here, to the south of the hospital building pictured earlier.

Currently, the buildings are being restored and renovated for use as offices by the Department of State. The observatory building is the last to be restored. It is on the National Register of Historic Places–and should be given the science done there and the people who gazed through its telescope. It is currently not open to the public but once restored, given its place in the history of science, it would be wonderful if people could see it and hear about what happened here. We’ll see.

38 Responses to Navigation, Astronomy, and Time