What to Call a Snow Hurricane

Snowzilla! Snowmageddon 2016 (the date is because we had a snowmaggedon in 2010; really one was quite enough). Jonas (when did the weather service start naming winter storms the way they name hurricanes?). Regardless of the terminology you prefer (and I prefer Snowzilla) it’s one big storm!

My neighbors Stan and Linda had put bird food out and attracted snowbirds and doves.

It started a little after 1:00 pm yesterday, continued through the night, steadily and without much in the way of wind. I ventured out to clear the front steps, which one of my neighbors had been keeping clear through the night. Then I wound up chatting with another neighbor. We decided to go out to see what was happening in the neighborhood.

Gulsah opened her window when she saw me shoveling.

It was about 11:00 in the morning. I took my tape measure with me and recorded about 14 inches of snow. My guess is we have closer to 18 at this point, with more to come.

News outlets are saying two inches an hour until it tapers off between 8:00 pm and midnight. That means we’re looking at 2 feet. Right now it’s a whiteout with some gusty winds. I’ve seen worse, but not in terms of accumulation. 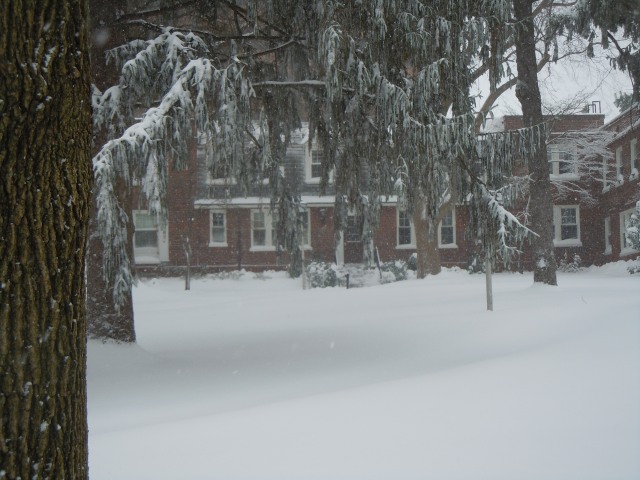 Looking uphill toward my building.

When weather forecasters start talking about snow, my first question is “Where is it coming from?” If the answer is across country from the west, I don’t worry. Those storms hit the mountains and drop what’s left on us before they blow out to sea.

Fogged out tree in the background is about a block away.

Gulsah suited up for our walk.

Gulsah and I wandered out of the courtyard where we saw another neighbor clearing her steps and walk. We wandered down the street and I could see that people had gathered on the sledding hill. A lot of people.

Big group of sledders. The woman in turquoise turned out to be a colleague who lives nearby.

Most of the time, people don’t have sleds. We don’t get enough snow often enough for people to invest in sleds. But this time we had plenty of warning there was going to be snow and people went out and bought plastic sleds. Someone even had an LLBean donut sled.

My colleague, Mary, headed downhill on the donut! I was unable to capture her fists-raised triumphant gesture at the bottom of the hill.

A colleague who lives nearby was among the people out with her children. She said they had been out for two hours and needed to go back home to warm up before coming out again. Probably a good call. In my experience, children will tell you with blue lips that they aren’t cold.

They don’t actually look cold, do they, lounging in the snow like seals…

We headed back and saw a snowboarder heading for a hill on Wilson Boulevard (the same hill people were stranded on Wednesday night in far less snow). He seemed really excited about getting some local snowboarding in.

You don’t see this often in Arlington.

It was nice that the storm let up a bit during the middle of the day so people could go have some fun before snugging in again. Tomorrow, if the power’s on, I think I’ll make some bread.

Picture this with 6-8 more inches. Not much difference, huh? 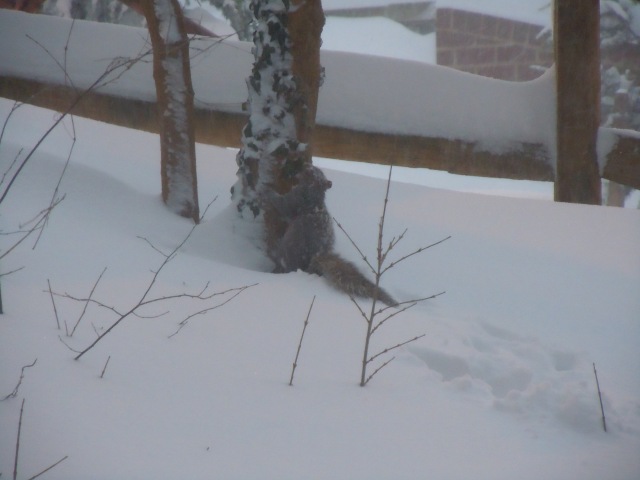 I’m not the biggest squirrel sympathizer, but it appears this little guy is reduced to noshing on winter ivy.

82 Responses to What to Call a Snow Hurricane