Yesterday was another scorcher. I went to the garden in the early morning to harvest and see what needed to be done. I was able to harvest quite a few Juliet tomatoes from the small Plot Against Hunger garden. The large garden has some squash and cucumbers coming on that will probably need harvesting midweek. Joanne, another gardener who has gone on a trip, asked me to harvest her garden and I got some nice squash and tomatoes from it. Just the harvesting left me dripping in the heat.

I went back in the evening and weeded the small garden, worked the soil, which had cracked in the heat, and gave it a good watering. The small eggplants are doing well, but the large tomatoes need bird netting or we will never harvest any for AFAC. I’ll run by the hardware store today for that.  I had a go at my own garden as well, where there are more winter squash coming on, but no summer squash, a problem for a few gardeners this year. My San Marzanos are snug under the bird netting and ripening away. 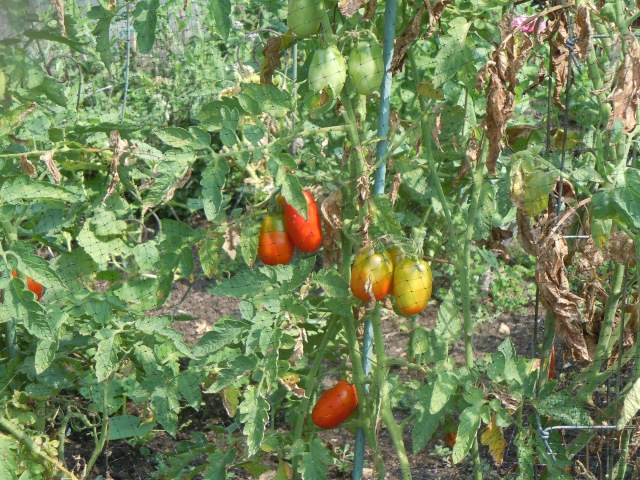 I’m so glad to be getting these now.

The Cherokee Purples are also safe, though some bird netting opened up during the week and nearly a whole Brandywine tomato was consumed, probably by a marauding squirrel. I sealed up that hole.

I won’t show what’s left of the Brandywine…

I’m getting fruits on all three eggplant varieties.

The plants are all much smaller than I’ve had in the past, but still seem to be producing.

The arugula I planted last week has come up. It’s under the chicken wire cloche as I’m not sure whether its seedling form is tasty to rabbits. 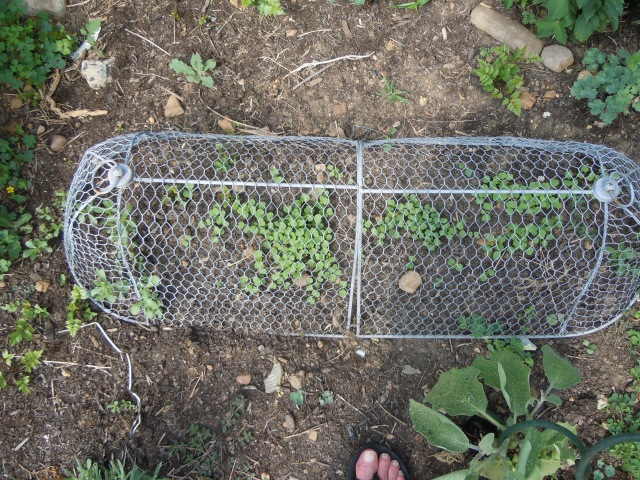 Just try to get at this, Peter!

I also picked flowers while I was there, taking advantage of Joanne’s offer of her sunflowers while she was away. Mostly I have zinnias in the mix, with a bit of Black-eyed Susan.

No competition with Eliza Waters, here! Check out In a Vase on Monday and you’ll know what I mean.

And I have a nice little bouquet on the bedroom bookshelf as well. Next year I hope to have a nice wildflower border and a larger mix, though I have to say those zinnias are a reliable and varied bouquet over the summer months.

It’s always nice to wake up to a little bouquet!

And have a look at that sunflower close up. 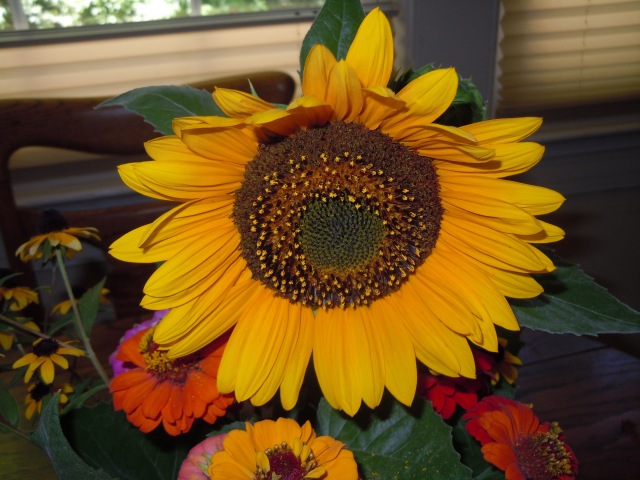 58 Responses to The Heat Continues