I can’t believe I haven’t written for more than a month. It isn’t as though the garden isn’t in full swing. I forgot the camera a number of times and then when I took it, I didn’t find time to write. So here is the update.

It’s pretty lush in my garden right now. We’ve had a lovely amount of rain and things are growing wildly.

Jane’s fabulous Plot Against Hunger garden has already given about 15 pounds of produce to the food assistance center. And that’s poundage in lettuce and kale and greens! Okay, some carrots and radishes, too. More will be going tomorrow from the small garden–Tom Thumb lettuces and some carrots, as well as more spinach from the large garden.

This garden is very productive. It’s given lots of lettuces, kale, and spinach and soon it will give beets and carrots. Later: squash and tomatoes.

So the season is in full swing. I had help today from Mike. He and his wife Gerda are neighbors in the garden and signed on to help in the Plots Against Hunger, which needed a weeding. Gerda will harvest early tomorrow so Mike can take the goods into AFAC. 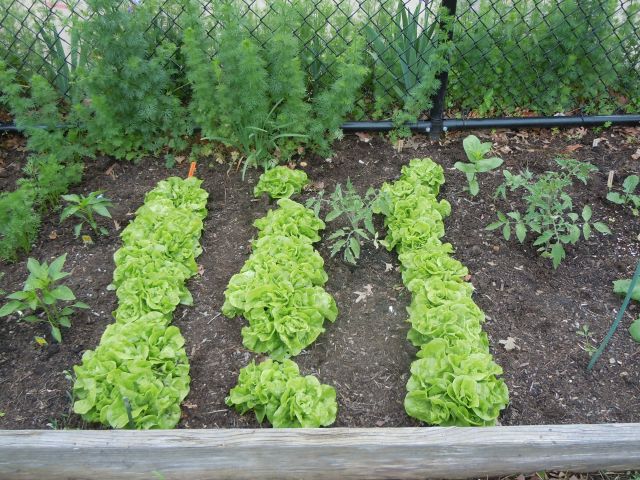 These Tom Thumb lettuces are the first thing to go to AFAC from the small Plot Against Hunger garden. Cheers!

My own garden is now fully planted. The spring crops, especially the greens, are coming faster than I can eat them, and all my salad and cooked greens recipes are starting to come back to me.

The flowers have been out–irises, columbine (aquilegea), now roses, and love in a mist (nigella).

I love these! And they’re just getting started.

And mallow. It is such pretty stuff, but wildly invasive.

I am the culprit who introduced this to the garden and now lots of people are having to pull it out!

Marcel, a gardener I hadn’t seen since last fall came today and when I wandered over to see him, he cut some of his peonies for me. I gave him a lettuce head from my garden. He said he was having a friend for dinner and would eat it tonight. Meanwhile, I have these lovely, amazing and fragrant flowers for as long as they last.

There was no way to do these justice with the camera. Of course I had packed all my large vases, but the water glass was perfect.

I am in the midst of packing up my kitchen for the remodel. I have been quite apprehensive about it, but that’s because I like a calm, orderly home. Supposedly the whirlwind will hit on May 15th. Since I may not have internet access enough for blogging while the remodeling is going on, if I don’t write next weekend, I’ll probably be absent again until the end of the month. But don’t worry. I’ll most likely be gardening.

37 Responses to Catching Up