Susan at Our French Oasis recently published a recipe both for mince pies and their filling. It was too tempting to resist. I have long had my grandmother’s recipe for mock mince meat, which was quite tasty. Still, when I received the recipe, I was astonished at the quantities, even as someone who cans. It is in pecks and pounds. There is a lot of boiling and re-boiling and rinsing and boiling again in it. So even though it was delicious, I have not made it.

Susan’s recipe was smaller, very similar to my grandmother’s except for the green tomatoes, and did not require boiling water processing. I thought, ‘now here’s something I can make.’

The recipe calls for raisins, currants, sultanas, orange and lemon, apple, brown sugar, spices most people have on hand, and a little brandy. I got to work this afternoon and pulled all that together on the stove. Susan mentioned she likes to toss in a handful of cranberries, which were not available in France yet, but I had them on hand.

She recommends making the pies in a muffin tin. It works a treat!

This stuff smells fabulous while it’s cooking, which is part of the point of holiday cooking. Once it was done, I followed her instructions for making mince pies using a muffin tin.

And here they are with their tops. And a bit of cinnamon sugar…

The nice thing about these delicious little treats is that they are small and–at least with this recipe–not too sweet. I can see having these with coffee, tea, or a robust red wine. Check out her blog for all the details. These are fast and very tasty. 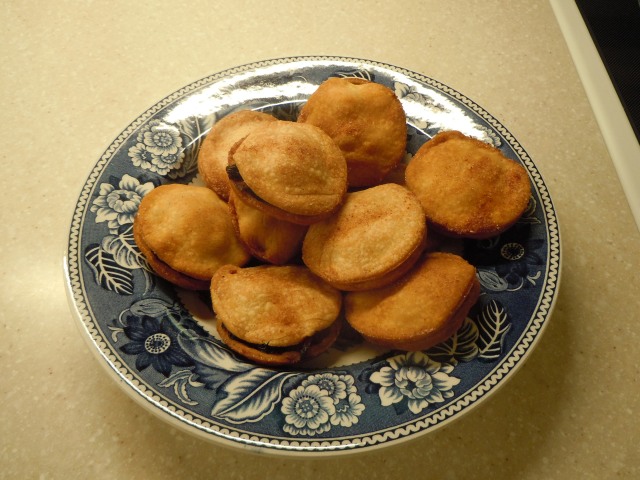 I’ve been feeding these to people and so far, they have all been pleased.

This entry was posted in Community and tagged Christmas baking, Mince meat, mince pies, Our French Oasis. Bookmark the permalink.