Goodness, we had the most extraordinarily lovely weekend. It was probably 60 degrees. I did not wear my winter coat on any of the myriad errands I ran. The air smelled that way it smells when it warms up after the cold and you get a whiff of thawed earth and something sweet, perhaps sunlight. Ahhhh…. I am not ready to think about spring; being season-wise, I know there is a lot of winter left. But oh, my, what a lovely respite. I feel like I can almost bear to look at the seed catalogues!

This is the best of the selections I’ve received so far. Still, I’ve avoided looking at them…

What I am doing, primarily, is baking. I bake every weekend, usually muffins, sometimes breakfast breads or coffee cake. Last week, I was looking for a recipe in my cookbook and came upon Apple Pie Cake. This is an old recipe I got from my Aunt Gene.

It starts with apples.

My mother and her sisters all had their wedding dinners at the Park View Hotel in Clintonville, Wisconsin. Sadly, it appears not to exist anymore. Apparently this was served as dessert at the dinners and my grandmother asked for the recipe. 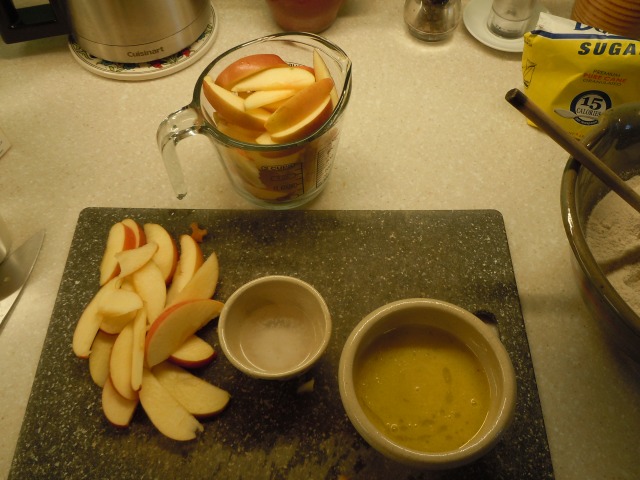 I think the next time, I would chop those slices so they’re chunks…

I always tell the age of a recipe by the proportion of sugar to flour. In this recipe, it’s one to one. There’s also an odd direction to put the soda in warm water, which I won’t do again. It works out better if I mix the soda in with the flour and other ingredients.

This calls for salt, which I wouldn’t add next time, given soda is the leavening. I’d also mix the soda in with the dry ingredients.

I’m not sure why it’s called apple pie cake, as it bakes up something like a cobbler would, though rather than pouring the batter over the fruit, it’s all mixed. The batter is also a bit stiffer than a cobbler batter would be.

I always have nuts on hand for pilafs, salads and baking.

Here it is ready to go in the oven…

I mixed all the dry ingredients and all the wet ingredients, then folded them all in together. It baked up into a pretty dessert, and I think I will make it again with the edits I noted. I hope you all have a good week that includes your just desserts and that they’re as sweet as you want. 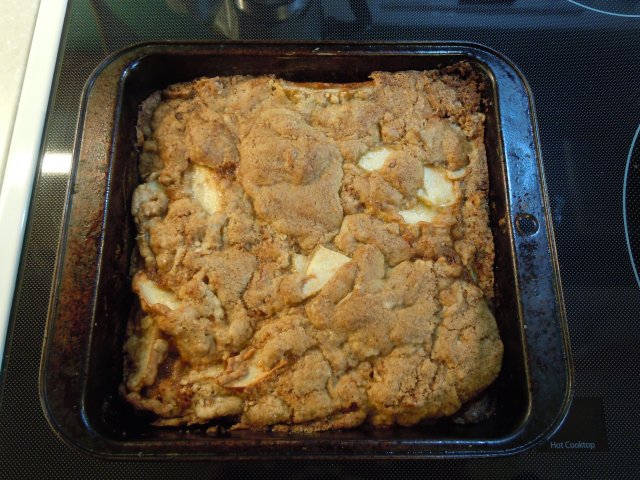 And here it is fresh out.