It’s not that I haven’t been in the garden.  I keep forgetting my camera when I go.  It’s been a good garden year.  I was able to pickle cucumbers and this morning, I’m putting up a second batch of tomato sauce.

I had to use the tomatoes I wouldn’t be eating in the next four days. These will be okay while I’m gone.

I work in pretty small batches of three to four pint jars at a time.  It works with the way I seem to get tomatoes and I can whip up a batch of sauce or whatever I’m making in a short time instead of making a whole day of it. Also, since I’m only one person, I don’t need lots of great big jars stored away.

Other than pesto, there’s just nothing like opening a jar of home canned tomatoes in the winter.

It’s now late summer and the cicadas are singing and evenings are cooling down.  We had the most extraordinary few days of weather only about 80 degrees and very low humidity.  I’ve had my windows open, enjoying all the outdoor grassy smells and the cicada singing–and of course, I’ve heard the birds in the morning and evening as well.

It’s turning warmer again in the next few days, though, which is fine by me, as I’m heading off to the beach with a friend and it must be hot at the beach, as far as I’m concerned. That way I can lie around in the sun, soaking up rays like a little lizard, run into the water to cool off as necessary, and of course, shelter under a beach umbrella and read a good mystery.

A few filled jars, with a leaf of basil tucked in each…

Other than gardening, this summer, I have also been reading.  Most recently, some essays by Richard Russo, The Destiny Thief, which have some interesting discussions of creativity and the writing life from the perspective of someone whose professors did not expect him to be a novelist.  The title essay is about a conversation he had in middle age with a former classmate their professors expected to be a successful novelist–who went on to be a professor instead. I also read Beatrice and Virgil by Yann Martel, and I have to say it was pretty terrible.  I kept reading, expecting it to get better, but I can’t remember a worse novel in recent years.  It managed to be both tedious and horrifying.  Like Our Souls at Night, I wanted to throw it at the wall when I was done, but unlike that novel, whose story arc I just disliked, this one was both frustrating and pointless. 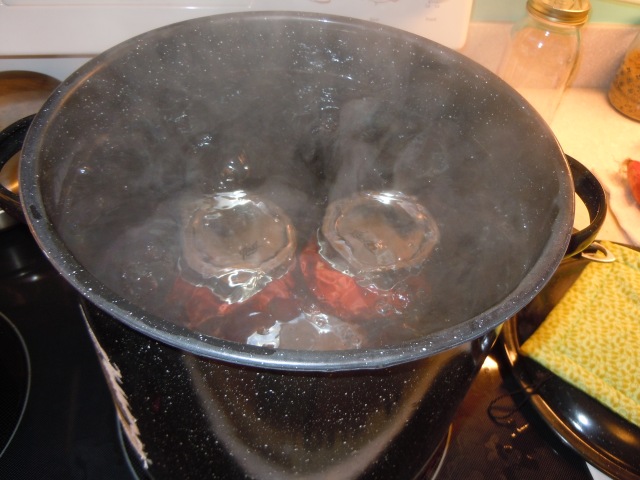 Tomato sauces take a 35 minute hot water bath because without pressure cooking them it takes that long to kill off the spores of evil organisms.

I also just finished Warlight by Michael Ondaatje.  I must confess to having read much of his output (except the poetry; and that’s because I read less poetry than prose) and liked it all. He has moved back and forth in time and geography in his novels, showing deftness and imagination of the best fiction writers.  His prose can also be the sort that makes me, a greedy reader, slow down and stop at the end of a chapter to absorb imagery and layers of possible meaning.  Warlight is narrated by a child looking back on events, with all the acknowledgement of misunderstanding, acceptance of the puzzling as normal, and ultimately revelations in adulthood.  It’s worth a read if you want to sink your teeth into something layered and mysterious.

I also got this eggplant from the garden. I’ll be fixing it today, since it won’t last the week.

I’ll be heading to the bookstore for something I can take to the beach with me.  I’m currently reading Good Omens by Neil Gaiman.  It’s not my usual thing, but it’s rippingly funny.  Unfortunately, it’s on my iPad, which I won’t be dropping into a beach bag. It tends to heat up in the sun.

So have a good week, all! I’ll be slathering myself with sunscreen and walking the beach, wearing the calluses off my feet.  And I’ll try to drop by some of your virtual porches to say hello. 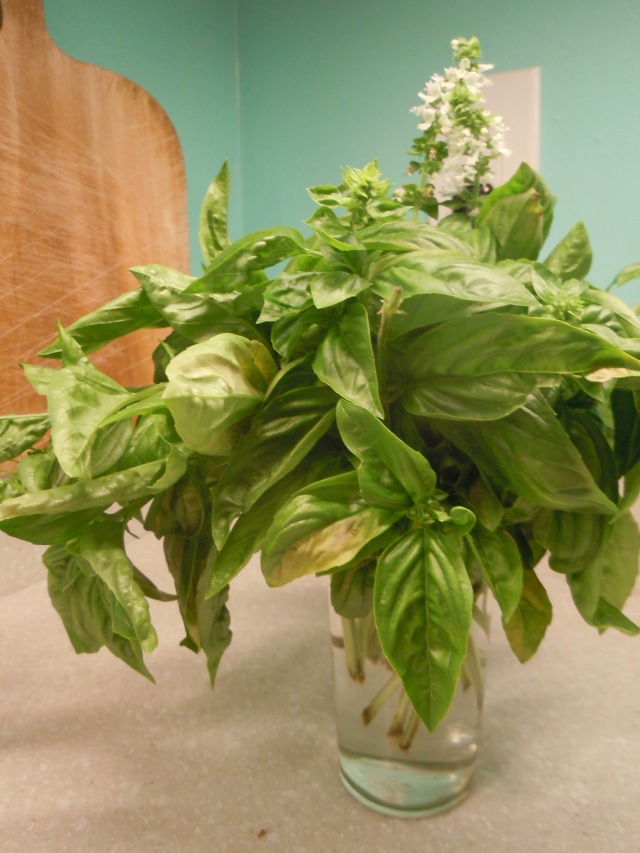 I wish I could share my bounteous crop of basil with you…it’s getting that end of summer look to it. More pesto!

This entry was posted in Community and tagged canning, gardening, novel reviews. Bookmark the permalink.