I have been a very bad blogger since my last post–neither visiting nor writing.  I apologize and will try to catch up on all the news, soon.  It’s a beautiful Easter Day here today, and I’m resting after making starters for the dinner I’m going to later and cleaning up the kitchen.  A cup of tea wouldn’t go amiss right now…

Not the kind of rabbit that eats my seedlings!

Yesterday I worked long and hard in the garden.  You may remember that I work three gardens.  One is for me; the other two, a small garden inside our fence and a larger space outside it, are for the Plot Against Hunger.  I only have pictures today of my own garden.  For some reason, I keep forgetting to take a camera or forgetting to take pictures when I do have it.

I planted the small garden a couple weeks ago with some head lettuces, radishes, carrots, cilantro, zucchini and summer squash.  Everything, except the dilatory carrots, is up.

I cut some of this to go with the oregano in the pasta–along with a little olive oil, some nuts, and some Romano cheese. I love that meal!

The large garden was another story.  You may remember last year, that the larkspur were glorious in it.  And they gloriously seeded.  I spent much of yesterday pulling out larkspur.  The asparagus I planted have come back, and next year, I expect we will have an asparagus harvest.  Yesterday, while weeding (larkspurring?), I discovered that one of the small blueberry bushes I planted last year had survived.  I cleared out nicely around it and will nurse it this year. 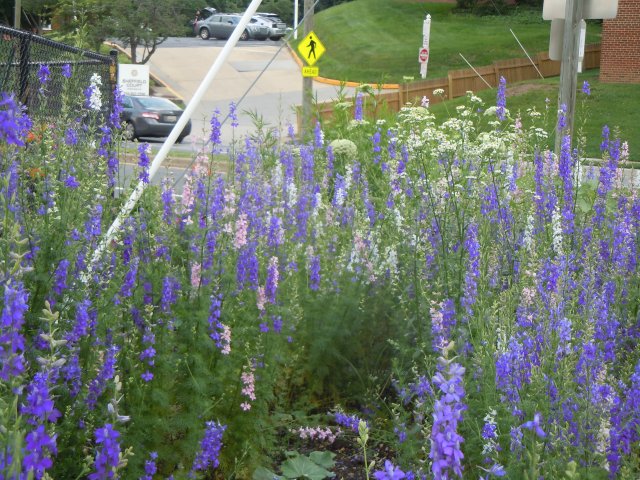 These were an amazing sight, gloriously thick on the ground.

My plan for the large garden is berries.  Since it is so open to depredation by passers-by, I thought I would put in permanent, perennial plants, and the sort of thing that you have to take some time to steal an amount worth eating from.  Outside that, I’m going to keep planting a flower border.  I’m considering strawberries, but frankly, I’m not keen on picking those.  The blackberry has done very well in the garden and was well-picked last year by me and passers-by.  The berries were delicious eaten right off the canes, which is probably why they were so well-picked!

The garlic won’t be ready for another couple months, but if it were, it would be going in that pasta dish as well.

So in the next few weeks, I’ll finish off clearing the large garden, purchase some berry plants and canes, get a flower border started and then settle into the work of weeding and harvesting.  I’m looking forward to seeing how things grow this year, and having cut flowers in the house again! 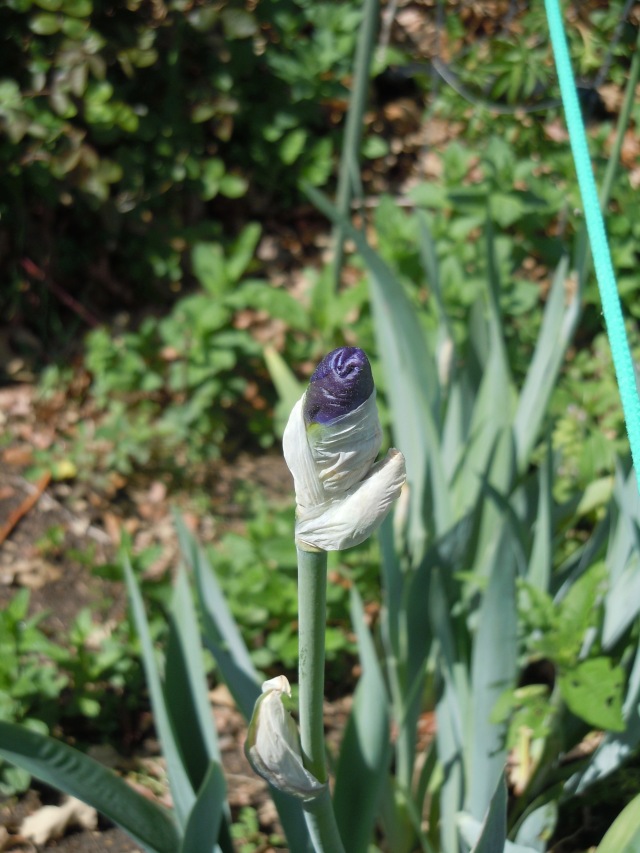 The irises will be in their purple glory soon.

Happy Easter and best wishes for the coming week.

This entry was posted in Community, Local Food and tagged Plot Against Hunger, spring gardening. Bookmark the permalink.

35 Responses to Spring Is Springing