Goodness what a week.  It started with a white woman threatening a black man with police for asking her to leash her dog in an area of Central Park reserved for birds and wild things.  It ended with riots.  In between, a white police officer knelt on a black man’s neck until he strangled him.  As I write, demonstrators are in Lafayette park across from the White House.  Tear gas has been deployed.  It’s like 1968.

Bees in the birdbath, drinking…

I remember 1968.  I was a child, but I remember Martin Luther King being assassinated in April and Bobby Kennedy being assassinated in June.  In April I was over at my friend Karen’s and my mother had come to pick me up, but the adults were discussing the murder.  In June, I was on a lake in Wisconsin where I turned 11 and every day I rowed out in a boat onto Loon Lake and caught and released little bullheads.  It was an idyll of family and friends, in the midst of which the adults talked about the murder.  Then there was the Democratic National Convention in Chicago.  Holy Toledo.

I should have harvested this rapini before it blossomed, but they were delicious anyway.

Back in the 90’s I was visiting a friend in Chicago and saw signs welcoming me to the city signed by Richard Daly and had flashbacks. (For those who don’t know the politics of American cities, Richard J. Daly was mayor in the 60’s and Richard M. Daly, his son, was mayor in the 90s.  Another son was a Senator.)  “All the news just repeats itself/like some forgotten dream/that we’ve both seen.”  No wonder I keep listening to old John Prine songs.  The kindling for this night has been stacking for a long time.

Foreground: bee balm; the rest is a fence of love-in-a-mist, something we could use instead of teargas.

I am disgusted and I fear for my country and its democracy.  I am afraid our lunatic President will declare martial law.  I am afraid the election will be cancelled and we won’t be able to get rid of him.  I am afraid the election won’t be cancelled and my fellow citizens will re-elect him.  Note that all the other news of the week, like more attacks on the free press and Twitter’s attempt to tell people to look further at the President’s assertions, as well as reaching a death toll of 100,000 from COVID-19 went unmentioned in my little ramble.  It’s been a hell of a week.

I baked cheese scones this morning,  the recipe from  Ellen Hawley’s Notes from the UK.

And delicious they were.

I did my laundry and cleaned the house.  I went to the garden.  The garden helped.  There were peas. 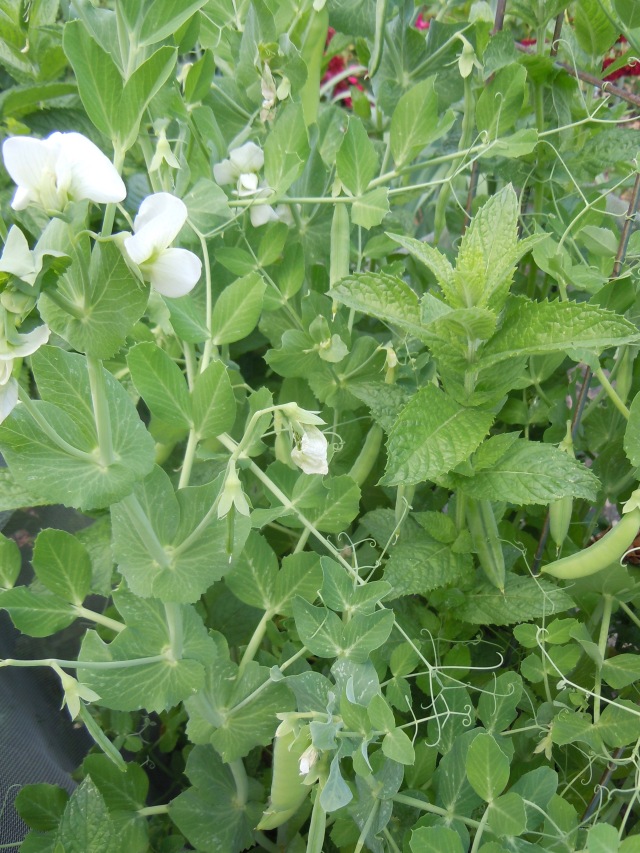 Find the pea pods. Yes, that’s mint in there…

Last week, I did some work, too.  I had been going to save seeds from the chard.  Looking at the wall of it, I wondered how much chard seed I actually needed, decided, and then pulled out all but what would supply enough.  Then I put in a new bean enclosure, since the peas are currently occupying the only other one. 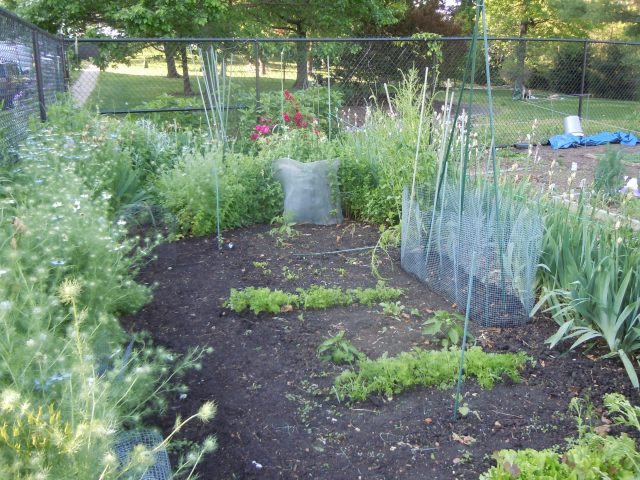 The new bean enclosure with the old one in the background holding the peas…surrounded by mint and oregano.

I’ll be in the garden again tomorrow to plant the Plot Against Hunger garden for summer.  We’re working with a variety of pantries and organizations and the PTA President and I have a call with the Arlington Public School nutritionist on Monday to talk about the possibility of distributing vegetables through them.

Nigella that haven’t opened fully yet and a few poppy pods.

So there’s some hope.  Let’s do what we can, raise hell if we have to, and not waste time looking for an easier world.

This entry was posted in Community, Local Food and tagged current events, gardening, Plot Against Hunger, vegetables. Bookmark the permalink.

54 Responses to The Constant Gardener?