Saturday morning I hitched a ride with Puwen Lee, Arlington Food Assistance Center’s Volunteer Coordinator, up to the USDA’s experimental farm in Beltsville, Maryland to pick turnips.  A group of about 15 met at the north farm and followed our contact, George, out to the turnip field.  By sampling the turnips and winter radishes, we were able to decide what sizes to pick.

George peels and slices a turnip.

The turnips are quite pretty as they sit in the field with their purple tops and tall greens.  While George told us these turnips were not planted to produce greens (who would have thought that was a specialty?), one end of the field had turnips with particularly good tops.  We wanted AFAC’s clients to have the benefit of both the turnips and the greens.

In about two and a half hours, we had more than 1300 pounds.  Then those of us with a hankering for turnips went back out into the field to pick a few for ourselves.  People were talking about how they planned to prepare them: mashed with butter; as turnip cakes; as greens with smoked turkey or bacon; roasted.

No, I didn't set out to match the turnips...

I brought my five turnips (and two small winter radishes) home and cleaned them in the sink.

I love turnip greens, but already had a bunch of Swiss chard from my garden waiting in the refrigerator.  So I chopped and blanched the greens so I could freeze them to eat later.  You could also lightly steam them or give them a short boil before freezing them.  The idea is that they should be able to stand a little more cooking when you decide to eat them.

Then I turned my attention to the turnips, which I wanted to roast with other winter produce.  I decided to mix them with a few mushrooms, carrots, celery, an onion, a few Brussels sprouts, an apple, and some thyme from my garden.

I never peel a turnip unless it’s rutabaga sized, so I just trimmed and sliced the turnips, chopped the other veggies, and put them in a dish for roasting.  I added the thyme, salt, pepper and a drizzle of olive oil and put them in a 400 degree oven.

Since oven temperatures vary, it’s always a good idea to monitor the veggies.  I checked them and stirred at fifteen minutes and they were done in another fifteen.  The best way to test, of course, is to stick a fork in one of the harder veggies, such as the turnips or carrots.  If they’re cooked to your liking, the others will be as well. 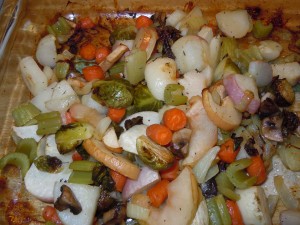 I ate mine with some salmon croquettes, but this mix looks pretty festive and could easily be an accompaniment to a more elaborate meal.  And they’re even better as leftovers.