On Friday afternoon, I got an email from a colleague who knew where my garden was.  She gave me a link to a local news organization that showed a picture of a bus that had ploughed through our fence and into the garden. I scanned the article quickly to make sure nobody was hurt.  Whew. Last time this happened with an SUV and it sideswiped a gardener who never recovered.

The bus had to be towed out.

Apparently, someone ran a red light and the bus driver, rather than t-bone the guy and kill him, took evasive action into our garden!  It saved lives and injuries, but left us with a wrecked fence and a few wrecked gardens.  The red light runner was ticketed and his insurance will be getting a few bills from us.

The small Plot Against Hunger got quite a working over.

My garden was untouched, but the small AFAC plot was pretty hard hit.  We were getting ready to plant for fall there, but hadn’t considered replacing the fence too! 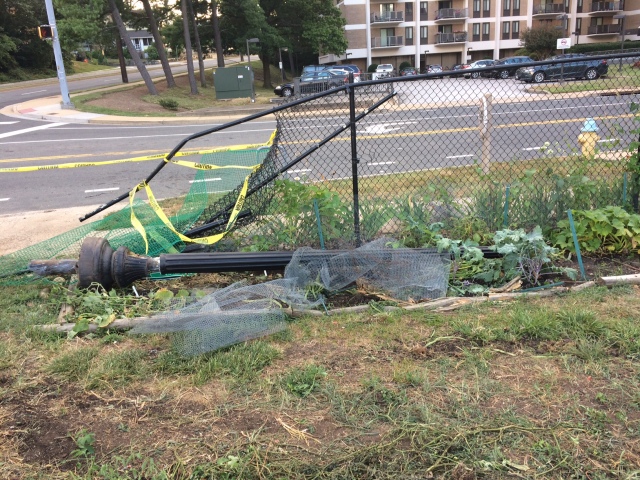 Tonight I salvaged what hardware cloth I could and tossed the bent up steaks.

There has been more vandalism in the outside garden (the blackberry bush was cut down) and we have decided to move the larger AFAC garden inside to a plot adjacent to the small one.  So I cleaned that out a bit tonight.  It had been abandoned and gotten weedy, but was mostly cleared during a garden work day. I will put some broccoli and cauliflower seedlings in there once I prepare rabbit protection for them.

A raised bed that was run over

I also gave the county a call and asked for a traffic analysis at that light.  I think it needs left turn lights.  We’ll see what happens.  For now we’re expecting the fence to be fixed next week and to do some of our repairs. soon.  In the meantime, enjoy this video one of the neighbors of the garden took, complete with rainbow.

This entry was posted in Community and tagged crash, garden destruction, traffic. Bookmark the permalink.

39 Responses to Excitement Nobody Needs